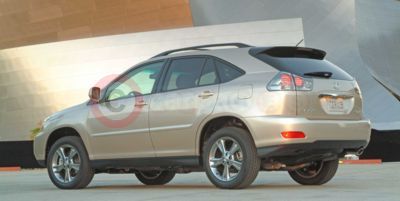 Fuel economy and low emissions have been traditional advantages of hybrid power systems. Where the RX400h is concerned, these qualities are now matched by impressive power output, too. The 400 in the vehicle’s name refers not to engine capacity, but to the fact the output can compare to that of a 4.0-litre petrol engine.

Lexus engineers have developed a hybrid system specifically for the RX400h, based on the Hybrid Synergy Drive concept used to great effect in the new Toyota Prius. They redesigned and refined the electrics, mechanical components and control elements to achieve performance levels appropriate for a luxury 4x4.

In addition to the petrol engine and the electric motors, the system also features a generator, high-performance battery and a power split device that enables power from the different sources to be combined or re-allocated according to driving conditions. The high-speed interaction of the different components in the system is governed by a power control unit.

In order to achieve higher output from the Hybrid Synergy Drive system, electrical capability was increased. Booster devices were added and a new high-speed front motor that operates at twice the speed, producing more than twice the power of that used in the Prius. Adding a rear motor enables four-wheel drive, and a newly developed nickel-metalhydride battery again produces almost double the power of that in the Prius.

The strength of the RX400h’s powertrain is expressed in a maximum output of around 270bhp, compared to 110bhp for the Prius. This gives the RX400h a top speed to match the existing RX300, but with a nought to 62mph acceleration time of less than eight seconds. More than that, fuel consumption is improved to a level usually associated with a four-cylinder family saloon.

Although the RX400h makes extensive use of advanced technologies, it is not complex to drive. The drive system is engaged by means of a gearlever mounted on the dashboard, operating a seamless, continuously variable transmission.

In the course of any journey, the Hybrid Synergy Drive system will operate in several different modes in order to maximise efficiency. At rest, the engine will automatically stop to conserve fuel. At times when engine efficiency is low, such as on start-up and at low to mid-range speeds, the vehicle will run on its electric motors alone, reducing exhaust emissions to zero.

This is a 17-year+ news article, from our Lexus archive, which dates back to the year 2000.

If in doubt check with your local Lexus dealer as car prices and technical data will have changed since 2004.