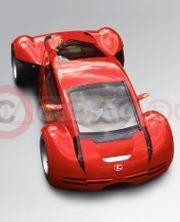 Can you imagine what cars will look like in the year 2054? Look no further than the Lexus stand at the British International Motor Show. From 23 October to 3 November 2002 film buffs and car enthusiasts alike will have the opportunity to view the Lexus movie car cast as the car of the future and driven by Tom Cruise in Spielberg’s critically acclaimed film, Minority Report, set in the year 2054.

For scenes calling for Cruise's character to drive outside the city limits, a radical red Off-System Sports Car was designed and tailor-built to fit the star. This vehicle was designed as a high performance two seat personal sports car for the year 2054 and flexes a muscular design with the ultimate in cab-forward seating. At first glance, it’s not entirely evident which is the front and which is the rear.

Even though the car is deemed a "concept car", it had to be functional: doors had to open, the steering wheel had to tilt, seats had to recline. And of course, to reach high speed and perform on-screen as well as it does, the coupe - powered by 47 batteries and an all-electric motor – has a four-speed gearbox with reverse. Post-production computer-generated special effects create the coupe's futuristic instrumentation, including a "head-up display" (an on-windscreen projection providing a clear view of controls and gauges a driver would typically have to look down for).

When the time came to conceptualise automotive travel for the futuristic setting, Spielberg didn't have to look any further than his own driveway for inspiration. "I drive a Lexus SUV," said Spielberg. "And I thought Lexus might be interested in holding hands with us and going into a speculative future to see what the transportation systems and cars would look like on our highways in 50 years. The result of that exploration is something that elevates and transforms driving into an environmental experience."

Moving back to the present day, the Lexus stand (1250, Hall 1) showcases its impressive full range of cars that now spans six different models.

UK Debut for IS200 SportCross

Making its UK debut is the new IS200 SportCross with its 153bhp six-cylinder engine. This new model complements the IS300 SportCross launched in autumn 2001, which combines dynamic performance with five-door versatility and created a new segment in the luxury car marketplace.

Other highlights on the stand include:

LS430, the quietest and most aerodynamic car in its class. It has by far the highest level of standard equipment available including adjustable air suspension, air-conditioned front seats, vibro-massage rear seats with memory and front and rear parking sensors

SC430 with its compact and avant-garde styling and a fully retractable hard top that can transform it from a coupe to a convertible in just 25 seconds, as well as maintaining the customary levels of Lexus refinement hood up or down

This is a 19-year+ news article, from our Lexus archive, which dates back to the year 2000.

If in doubt check with your local Lexus dealer as car prices and technical data will have changed since 2002.