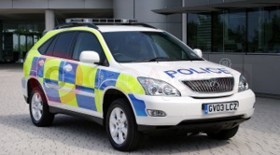 The new Lexus RX300 has already delivered outstanding results since reaching the UK market in May, helping to drive Lexus’s sales to record levels in July and outperforming its key rival petrol-powered luxury SUVs. Now it is set to develop another dimension in its success in a new role as a police patrol vehicle.

Presented in full chequer livery and equipped with sirens and emergency lights, the RX300 is to be shown for the first time at the National Association of Police Fleet Managers’ Conference and Police Fleet Show in Swindon on 19 and 20 August. Lexus personnel will be attending the event to provide a professional insight into the qualities that make the RX300 perfectly suited for police service.

Several forces have already signalled an early interest in the RX300, a car that combines power, secure handling and exceptional reliability and durability. Elements such as these have been central to the success of RX300 in the consumer market and are considered even more crucial when it comes to satisfying the special demands of police use.

The RX300 is powered by a 201bhp 3.0-litre VVT-i V6 engine that delivers nought to 62mph acceleration in nine seconds and a maximum speed of 124mph. Handling and braking performance are aided by standard-fit permanent four-wheel drive, ABS with Electronic Brakeforce Distribution, Brake Assist, Traction Control and Vehicle Stability Control.

The development of the RX300 moves forward Lexus GB’s police programme, which is additionally preparing all IS, GS and LS models to meet the standards of the Home Office framework agreement for police vehicles. Since the beginning of the year, Wiltshire Constabulary has been running a GS430 as a motorway patrol car and more recently added an IS300 SportCross to its fleet.

Andy Simpson, Lexus GB National Corporate and Re-Marketing Manager, said: "The UK’s police forces can provide a hugely testing and very public arena for the RX300 to demonstrate its excellent qualities. Reliability is one of the foundation stones of Lexus’s unparalleled success as a brand and it becomes a vital issue when cars are being run right around the clock, as is the case with many police patrol cars.

"More than that, the RX300 offers ride, handling and performance characteristics together with driver comfort and built-in versatility that meet more of the special demands made by the police. As well as being a formidable all-round package, the RX300 also has its key market rivals soundly beaten on price."

Following its debut at the Police Fleet Show, the RX300 will begin an intensive round of approval tests with interested forces. Following completion of official testing requirements, the car could be seen in full service by early 2004.

This is a 18-year+ news article, from our Lexus archive, which dates back to the year 2000.

If in doubt check with your local Lexus dealer as car prices and technical data will have changed since 2003.