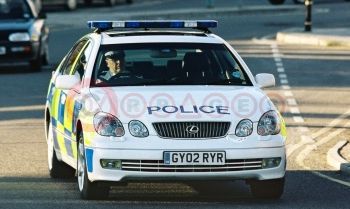 The qualities of supreme engineering, power and interior space and comfort which distinguish the Lexus GS430 have earned the model a new role as the latest addition to Wiltshire Constabulary’s vehicle fleet.

In choosing Lexus, the force has stayed true to its motto Primus et Optimum – First and Best – and its reputation for forward-thinking solutions in police transport. The Constabulary has pioneered the use of police cars from 1920 when it took delivery of its first patrol vehicle. More recently its eco-friendly profile has been strengthened with the use of low-emissions biodiesel fuel for all its diesel-powered vehicles and a steady increase in mountain bike patrols in urban areas such as Swindon.

Working at the other end of the spectrum from the pushbikes, the Lexus GS430 will be used principally for patrols along the M4 motorway and will have a service life of around 150,000 miles in three years.

The Wiltshire force was introduced to the GS430 with a two-week test, but such was the enthusiasm for the car, it didn’t want to send it back. Steve Botham, Wiltshire’s Fleet and Service Manager, explains: "The car came on a short term demonstration and it was so well received when we put it out to our traffic units we decided to purchase it.

"The reports on the car were very favourable, particularly because of its power and the space inside. Some of the vehicles we use have to be modified – the suspension, for example – but with the Lexus the quality is so good, no changes will have to be made."

Powered by a 4.3-litre 282bhp V8 engine, the Lexus has the power to move from rest to 62mph in 6.3 seconds. Top speed is limited to 155mph. The car’s exceptional comfort will be appreciated by officers working shifts of several hours at a time, while the 510 litres of load space will ensure all essential equipment can be stowed safely.

Andy Simpson, Lexus GB Corporate Sales Manager, says: "It is wonderful that the Lexus GS430 enjoyed such a positive response from the police so soon after it was put forward for appraisal. The Lexus IS300 SportCross and the GS300 have both been approved by the Home Office as framework vehicles for police authorities and in addition, the GS430, with its extra V8 power, has proved a success.

"We are sure the competitive running costs and the reliability of Lexus vehicles will soon bring more opportunities of this kind for the brand."

This is a 18-year+ news article, from our Lexus archive, which dates back to the year 2000.

If in doubt check with your local Lexus dealer as car prices and technical data will have changed since 2003.