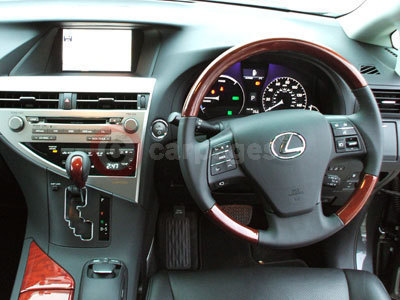 When it comes to the Lexus RX450h's technology, these points are barely scratching the surface. Some of it is obvious such as the ride-height adjustment button and the satellite navigation system but overall it would seem that the Lexus RX450h is something of a swan; serene on the surface but a lot going on underneath.

And the Lexus RX450h is serene. The dynamic handling is tuned specifically for European roads and driving styles and provides a smooth ride without any loss of feedback. It is quite agile and the electronically controlled, air suspension, which is standard on the SE-L Premium model, maintains a level ride and improves cornering.

The Lexus RX450h test car was the £52,425 SE-L but prices start at £42,330 for the SE version. In all, there are four trim levels and none of them are lacking in any way. For instance, they all have leather upholstery with powered and heated seats and at least a 6CD autochanger. The test car had a Mark Levinson 15 speaker, audio system with 6DVD autochanger, 40GB HDD (Hard Disc Drive), 10GB of which is for more permanent music storage; satellite navigation, rear parking monitor and Remote Touch control.

The Remote Touch control is kind of a static handset that sits on the upper level of the central console, just in front of the armrest. It resembles a mouse in shape and function, in that a flat-topped knob can be used to move a cursor on the screen in order to make changes to the navigation, audio, climate and vehicle settings, amongst others. The cursor has a 'snap-to' function to speed up the selection process and, as well as being tactile, it is very easy to use.

The same can be said for the whole car; the Lexus RX450h is very easy to use and drive with plenty of interior space and thoughtful touches. The rear centre seat, which doubles as a ski-flap or armrest, has a recess in the base of the squab, where the unused seatbelt connection sits. It looks tidier and nobody is likely to experience the discomfort of sitting on it.

It is the small things, such as this, that make the Lexus RX450h that little bit different. For sure there are a number of luxury SUVs on the market but the Lexus RX450h somehow stands apart and it isn't simply that it is a hybrid but it helps.