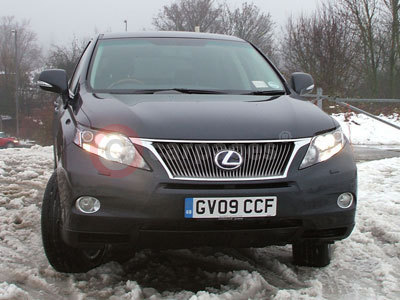 Launched in July 2009, the Lexus RX450h represents the third generation of RX, the second generation of Lexus Hybrid Drive and the acceptable face of luxury SUV motoring. And that’s a bit odd considering there’s a 3.5 V6 engine under the bonnet.

Beyond the cosmetics, the new Lexus RX promises ten per cent more power, a 28 per cent improvement in fuel consumption and a slightly softer new look.

There are various forms of hybrid and the format that is used in the Lexus RX is a combination of series and parallel and the best of both worlds. The full hybrid system has the capability of running the electric motors and engine simultaneously or independently of each other.

Notice I said motors, plural. The Lexus RX450h has two electric motors; one at the front that works with the 3.5V6 petrol engine and one at the rear, which is effectively what gives the Lexus RX its 4x4 capability. It is mechanically separate from the combination at the front but they all communicate via the Vehicle Dynamics Integrated Management system (VDIM) and the PCU or Power Control Unit.

The 3.5-litre engine is carried over from the Lexus RX400h but, as always the way, it has been tweaked to work more efficiently with the Hybrid layout. It produces 246bhp at 6,000rpm and 317Nm at 4,800rpm and makes a wonderful muted, rumbling noise at slower speeds.

On top of this, the electric motors come in, on an on-demand basis. They have the same outputs as in the previous model: 165 and 67bhp, front and rear, respectively, however we are told that the improved cooling functions have now increased the torque to 335Nm at the front and 139Nm at the rear – all available from standstill. It is hard to give a total torque figure for the Lexus RX450h as it isn’t simply a case of adding them all up, which would come to 891Nm, but whatever it is, it is impressive.

What goes on underneath is quite complicated, but Lexus has simplified it for the driver somewhat by the use coloured panels on the “hybrid system indicator”, which effectively replaces the tacho or rev-counter, and a small diagram on the information display, between the main dials in the instrument panel. This animation shows where the power driving the wheels is coming from: the engine, the motor or a combination of both and, as soon as you lift off the accelerator, the rev-counter needle drops into the blue area and the graphic shows power being fed back into the battery. The same works for braking and on long journeys, you can note the battery level as it rises and falls.