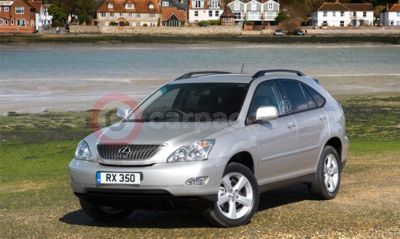 Since launch in 2003, the RX 300 has proved a strong performer in the petrol-powered premium SUV segment, frequently topping the UK sales charts in its class. The introduction of the new RX 350 provides even stronger performance, with greater fuel economy and lower emissions, to further strengthen the model’s market position.

The key change is the introduction of a new 3.5-litre V6 engine that is not only the leader in its class in terms of power and acceleration, but which also outperforms its six-cylinder petrol-powered rivals in fuel consumption and emissions. Needless to say, the figures also mark significant advances on the previous 3.0-litre unit deployed in the RX 300.

The RX 350 shares the same class-leading specifications as the previous RX 300, with the addition of a new Lexus Multimedia and Navigation pack, which includes a more sophisticated 11-speaker Mark Levinson premium hi-fi.

The engine also benefits from hydraulic valve compensators for roller rocker valve operation, and an electrically-activated Acoustic Control Induction System (ACIS), which varies the level of air induction by automatically adjusting the length of the intake pipe according to engine speed.

The result is smooth operation and excellent efficiency, delivering high performance with low fuel consumption and emissions levels. The new V6 is the most powerful, yet also the most economical of all conventional V6 petrol engines in the premium SUV market. It develops 272bhp (276 DIN hp) at 6,200rpm and 342Nm of torque at 4,700rpm, giving nought to 62mph acceleration in 7.8 seconds – better than any other petrol six-cylinder model in its class. The top speed is electronically limited to 124mph.

These figures do not conceal a penalty in fuel consumption. On the combined cycle, the new RX 350 can achieve 25.2mpg, eight per cent better than the previous RX 300 and ahead of all its six-cylinder class rivals.

The new V6 engine is matched to the same five-speed automatic transmission as the previous RX 300, but performance and economy have been improved thanks to the adoption of new shift control logic. Moving the gear lever in S mode activates a manual five-speed sequential shift system that provides better engine braking, precise control and greater driver involvement.

The permanent four-wheel drive system has a new centre differential with a viscous coupling, giving a limited-slip capability. This aids smooth delivery of the extra power available (35 per cent greater than the RX 300) and, allied to the retuned Vehicle Stability Control (VSC) and Traction Control (TRC) systems, gives better traction and stability in all driving conditions.

The steering of the new Lexus RX 350 has also been reconfigured to give a more direct and positive feel. Additional assistance at low speeds makes parking manoeuvres easier, complementing the vehicle’s best-in-class 5.7m turning radius.

Particular attention has been paid to reducing noise and vibration levels, ensuring that, although the new RX 350 is substantially more powerful than its predecessor, it is quieter at all engine speeds.

Measures to achieve this include a new bonnet insulator, dashboard silencer, improvements to the exhaust system and a new acoustic windscreen, with a special inner film that reduces noise levels in the cabin by up to 3dB.

The new RX 350 offers owners a combined multimedia and satellite navigation package that delivers new high levels of technical innovation, flexibility and ease of use.

Fitted as standard to the RX 350 SE-L and offered as an extra-cost option on the RX 350 SE, it includes an improved 11-speaker Mark Levinson hi-fi system with a seven-channel 210 watt digital DSP amplifier. It will play CDs, audio and video DVDs and MP3 and WMA files stored on disc. Movies and music videos on DVDs can be enjoyed on the central Electro Multi Vision (EMV) display screen on the centre console.

The navigation system provides route calculation 65 per cent quicker than before and is equipped with a voice command system that can also be used to activate several navigation, audio, climate and telephone functions. Bluetooth connectivity is also included, for hands-free use of mobile telephones.

To complete the package, the Lexus Parking Assist Monitor makes reverse manoeuvres simple and safe, automatically providing a real-time colour image on the EMV screen of the area immediately behind the vehicle when reverse gear is selected. The images can also be overlaid with guidelines for extra help when easing into a parking space.

Lexus RX 350 And The UK Market