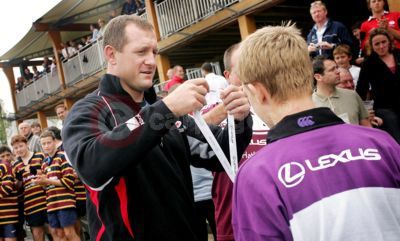 More than 550 schoolboys from across London yesterday participated in the inaugural Lexus Junior Rugby Festival, with England International and British Lions flanker Richard Hill on the sideline checking out England’s future rugby stars.

Junior teams from Old Albanians, Ealing, Harrow, Southend, Westcliffe and Woodford Rugby Clubs took part in the festival to celebrate the start of the 2005 rugby season.

Each of the six clubs were sponsored by a local Lexus centre and 25 teams from under 13s through to under 17s competed in shortened games featuring two 10 minute halves.

Richard Hill presented the winning teams with their trophies at the end of the day.

Last month Lexus announced a sponsorship agreement with the Harlequins Rugby Club involving the naming of the new stand that provides an additional 3,850 covered seats and various sporting and corporate facilities.