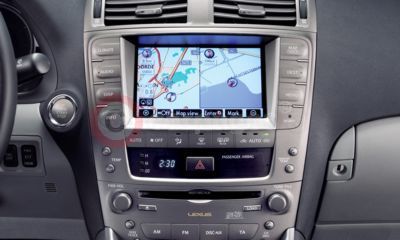 The new Lexus IS will be the first model to receive the next generation Lexus Navigation System, featuring new guidance functions with improved graphics and speed.

On sale from 19 November, the new Lexus IS range will also offer the Lexus Parking Assist Monitor, a unique feature in the segment.

"At Lexus, we want our customers to make the most of every moment. This is why developing a car that is great to look at and exciting to drive was not enough. We have equipped the new IS with features that should make normal commuting a pleasure," said Suguya Fukusato, new Lexus IS Chief Engineer.

The new system is equipped with voice activation in three languages (English, French and German), allowing the driver control of the navigation, audio, air-conditioning and phone systems through voice command. Voice guidance is also available in 10 languages, now including Norwegian and Portuguese, and a Help function has been incorporated, allowing the user to receive further instructions via an on-screen help button.

The system is one of the few on the market to combine the advantages of both touch-screen and voice activation, thus obviating the hand-eye coordination limitations imposed by the control knob of conventional systems.

A lane guidance feature is now available for the major cities of the UK (London, Birmingham, Manchester and Glasgow), Germany (Berlin, Munich, Frankfurt and Cologne) and Belgium (Brussels), forewarning the driver of an impending lane change before issuing further instructions. Furthermore, the new system also offers a route tracing function, which can record the route taken by the vehicle and display it on the navigation screen.

Other functions are carried over from the previous system, such as RDS-TMC (Radio Data System – Traffic Message Channel) which provides dynamic route guidance capabilities. The system automatically monitors traffic information in conjunction with its route search programme, enabling alternative routes to be suggested if congestion or delays are detected ahead.

A BluetoothTM phone, hands-free system is also integrated into the new Lexus Navigation System. It enables the user to make and receive hands-free cellular phone calls by operating the touch-sensitive 7" LCD screen, the steering pad switches or through vocal commands, accepting a maximum of 20 voice tags. Moreover, the system can store up to 1,000 contact numbers from a mobile phone.

The Lexus Parking Assist Monitor is also available on the new Lexus IS, which becomes the first car in the premium D segment to offer a visual guidance parking system.

Operating through the high-resolution EMV display, the Lexus Parking Assist Monitor features a video camera mounted in the rear number plate surround that projects a full colour rear view of the surroundings. Even greater manoeuvring accuracy is promoted by screen-generated guidelines which indicate the prospective path of the vehicle based on the current steering position. This represents a step forward in practicality compared to conventional sonar systems.