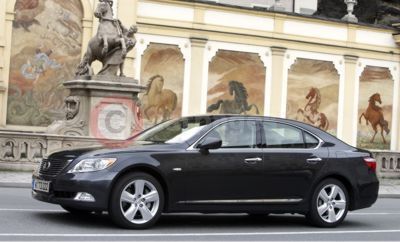 The new Lexus LS 460 has been declared World Car of the Year 2007 by a group of international journalists. The announcement was made at a press conference at the New York International Auto Show on 5 April, 2007.

The Lexus LS 460, launched in January, was chosen from an initial entry list of 28 contenders nominated by World Car jurors from 22 countries throughout the world.

WCOTY jurors considered the prestigious LS 460 to be “the embodiment of the Lexus brand's motto – the pursuit of perfection. Classically luxurious, with modern execution, unquestioned quality and more than ample power, it also offers a green alternative in the form of the soon to be launched LS 600h hybrid variant for those who seek guilt-free indulgence.”

The jurors also recognised that Lexus continues to build its reputation with this luxury flagship boasting many firsts, including a novel automatic parking system and an 8-speed automatic transmission.

"We are honoured to receive this prestigious award recognising the LS 460 as the '2007 World Car of the Year,'" said Bob Carter, Lexus group vice president and general manager.

Rather than being just a popularity contest, the objective of WCOTY is to ensure that the award would be the product of a fair and thorough assessment process that considered the needs and wants of consumers the world over. The process began with individual jurors evaluating and rating the candidates using a variety of standardised parameters - everything from styling and quality, to performance and safety. The jurors then voted in January to establish a top-ten short-list. The World Car of the Year was chosen from those finalists with the results tabulated by the international accounting firm, KPMG.

The top three contenders for the third annual World Car of the Year in addition to the Lexus LS 460 were the Audi TT and the MINI.

About World Car of the Year Awards

The World Car of the Year Awards programme was initiated, organised and conducted by automotive journalists from around the globe. It was established in 2003 and officially launched in January 2004. A non-profit association guided by a Steering Committee of journalists from Asia, Europe and North America administers the awards programme. WCOTY is intended to complement, not compete with, existing COTY awards by raising consumer awareness of regional Car of the Year award programmes as well as the World Car of the Year

This is a 14-year+ news article, from our Lexus archive, which dates back to the year 2000.

If in doubt check with your local Lexus dealer as car prices and technical data will have changed since 2007.

Lexus LS Images may not be UK specification cars. Colours and exterior and/or interior elements may differ from actual models.