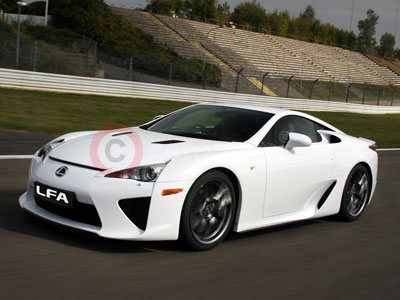 In the three months since it was unveiled to the public at the Tokyo motor show, the Lexus LFA has been greeted by critical and public acclaim worldwide. Even though it is one of the most exclusive supercars money can buy, the number of formal expressions of interest in purchase received by Lexus is already greater than the limited production run of just 500 examples.

This does not mean that anyone wanting to own a Lexus LFA has missed their chance, as they can still register their interest up to mid-March 2010 and the end of the Geneva motor show. It is at this point that the 500 cars will be allocated across the 56 countries where they are on sale, with confirmed orders with deposits to be invited from the end of May 2010.

The centre for all European sales is Lexus Park Lane, where the Lexus LFA commands a prime showcase position on one of London's most prestigious streets.

Devshi Varshani, the Personal Liaison Manager who looks after all LFA sales, said: "The level of interest we have witnessed reinforces just what an exceptional car the LFA is. Even though few people have even seen the car in the metal, let alone experienced its breathtaking performance, it has quickly achieved the status of a truly rare and highly sought-after machine."

The Lexus LFA is designed to deliver the supreme driving experience, powered by a mid-front mounted 4.8-litre V10 engine that produces 552bhp for nought to 62mph in just 3.7 seconds. Hand built in strong but ultra-lightweight carbon fibre material, it represents the pinnacle of advanced automotive design and engineering.