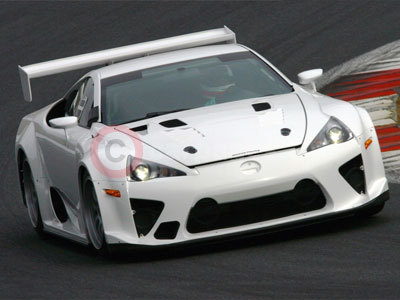 Lexus is heading back to the legendary Nurburgring this spring to challenge for glory in the 24 Hours endurance race with its Lexus LFA supercar.

It will be the first time the production Lexus LFA is seen in full-blooded competition, taking on one of the world's most challenging circuits in a marathon test of speed, handling and durability. In two previous outings in the event, development versions of the Lexus LFA were raced primarily to help hone performance and handling. This time the Lexus LFA will line up as a prime challenger in standard production car guise.

It's a formidable proposition: with its advanced, lightweight composite construction and 552bhp mid-mounted V10 engine, it will reach 62mph in just 3.7 seconds and race on to a top speed beyond 200mph.

Gazoo Racing will prepare and field the two Lexus LFA in the event, which takes place from 13th to 16th May 2010. Led by Toyota master test driver Hiromu Naruse, the team will include four Japanese and three German drivers who between them boast outstanding GT and endurance racing experience.

Takayuki Kinoshita is a six-time winner of the Super Taikyu Endurance Series and has competed more often and finished higher (fifth overall) at the Nurburgring 24 Hours than any other Japanese driver. Akira Ida was overall winner of the Tokachi 24 Hours in 1995 and 2007, and both Juichi Wakisaka and Kazuya Oshima have recorded consistent success in Japanese Super GT 500 and GT 300 competition.