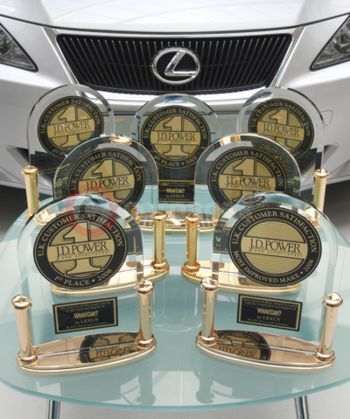 Lexus has once again topped the J.D. Power and Associates UK Customer Satisfaction Study, claiming the 2006 Gold Award for an astonishing sixth successive year. The luxury car brand scored a total of 873 points out of 1000 in the ownership satisfaction survey, well above the industry average of 791 points.

In addition to topping the rankings for overall satisfaction, Lexus was the industry leader in three of the four key measures; Quality/Reliability, Service Satisfaction and Vehicle Appeal.

The exceptional level of customer service offered by the Lexus network of centres was recognised with the brand earning the highest Service Satisfaction score, 899 points. Lexus ranks in first place for all five sub-measures within this category including Service Advisor, Dealership Facility, and Service Quality.

A top score of 958 points in the Quality/Reliability category once again demonstrated Lexus’s excellent quality and reliability reputation. Lexus also had the lowest problem incidence rate with 70 problems per 100 vehicles, well below the industry average of 198.

Lexus was also given the "most improved" award for increasing its overall score by 25 points.

The Lexus IS range was the highest placed model overall in the survey with a score of 868 points, 7 points ahead of the second place model.

The 2006 J.D. Power survey, presented in conjunction with What Car? magazine, was conducted among drivers of cars registered between September 2003 and August 2004. The results were drawn up from almost 15,000 completed questionnaires from both private owners and company car drivers.

Steve Settle, Lexus Director, said: "We are absolutely delighted that we have been presented with our sixth Gold Award in a row.

"The J.D. Power survey has once again shown that our customers are the most satisfied in the UK and this time by quite a substantial margin. This is a testament to the excellent work done by our network of centres and the Lexus GB team.

"However, we must not be complacent and we will work even harder to ensure that customer service is high on the agenda across the whole Lexus team, including our centre network.

"Over the past 12 months we have launched some exciting new models into the Lexus range, including hybrid powered vehicles, and we look forward to satisfying more customers as we continue to grow in the UK."

In 2006 Lexus has also retained its number one position in the latest Dealer Attitude Survey conducted by the National Franchised Dealers Association and was again named Best Manufacturer in the 2006 Driver Power report published in Auto Express magazine.