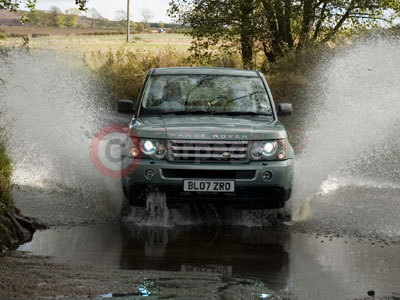 The Brembo four-piston brake callipers and 360 mm front discs made short work of stopping the Range Rover Sport; in fact they were surprisingly good. The TDV8 is fitted with 20” wheels with 275/40 tyres which compares to 19” wheels with 255/50 tyres on the TDV6 model.

The air suspension works well at soaking up the largest of pot holes on and off road. What we would say is that the suspension can make some people feel a little sea sick at first, especially if you are pressing on, on undulating country roads. The suspension has three selectable height modes, one for entry/exit which lowers the car, normal ride height and an mode which significantly increases ground clearance. At speeds of over 100 mph the suspension automatically lowers the ride height to help with aerodynamics, rising back to normal at 80 mph.

We did not have the opportunity to take the Range Rover Sport too far off road; on our tour of Northumbria we did use several forest tracks and military roads. Back in Devon we were able explore the Sport’s potential over several green lanes and over our friendly farmer's tracks. Nothing too challenging for the Range Rover Sport's superb Terrain Response System, which was first seen on the Range Stormer concept car and then put into production on the Land Rover Discovery 3.

The Terrain Response System is a major advance in off-road driving that optimises driveability and comfort, as well as maximising traction. The driver simply chooses one of five terrain settings via a rotary dial on the centre console: there is a normal driving program, plus one for slippery conditions (known as grass/gravel/snow) and three special modes, namely mud and ruts, sand, and rock crawl. Terrain Response then automatically selects the most appropriate settings for the vehicle's advanced electronic controls and traction aids. The vehicle functions controlled by Terrain Response include ride height, engine torque response, Hill Descent Control (which limits downhill speed), Electronic Traction Control, transmission and differential settings.

In practice it is simple to use and it works exceptionally well and as with the Discovery III we had tested before on the same roads we drove easily through deep muddy water filled forest tracks (which we had permission to use) and all we did was simply select the mud setting and then we drove cautiously onwards without any drama, letting the clever electronics take control. In a local quarry we tested the hill decent control and again without drama, we climbed and descended impossibly steep inclines that would have had us spinning in other four wheel drives, such as BMW’s X5 or Porsche’s Cayenne.

We were also impressed with the driver interface, which works by utilising the Satellite Navigation's TFT panel. It gives the driver information about which way the front wheels are facing, which is very useful plus information on wheel articulation, differential locks and traction.

All round visibility is very good with a commanding view of the road ahead. You do have to be aware of people and animals etc, which can be lost due to the height of the Range Rover Sport. There are standard front and rear parking sensors, which only give you an audio warning, we think it would have made perfect sense to have fitted front and rear cameras as it can be difficult to judge what is approaching the overhangs of the car.

The driver’s seats have full eight-way electric adjustment with three memories for other driver’s seat and mirror settings. It was easy to obtain a comfortable driving position, although we would have liked the steering column to be electrically adjustable and linked to the memory function as it is manually adjustable for rake and reach. The front passenger seat is also electrically adjustable but without a memory function. The front and rear leather seats have two stage heating elements, and they are extremely effective which was very welcome in colder weather conditions.

All of the controls are easy to use and locate, the dual climate control was a little fiddly, perhaps not amongst the best. You can operate some of the controls using voice commands, such as the audio and Satellite Navigation systems, personally we found it a little tiresome when it didn’t understand our commands, but we are sure with some perseverance it would work well.