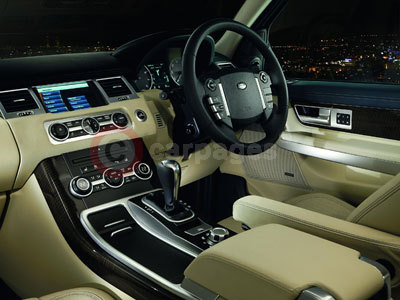 And that brings me onto handling and performance. The new Range Rover Sport now has an Adaptive Dynamics system to compliment the existing Dynamic Response system for better ride and handling. It is based on predictive technology using the ubiquitous sensors that monitor conditions 500 times per second and making adjustments to the damper settings on each wheel. In this case, the normal damper system is replaced by DampTronic Valve Technology, which is continuously variable.

The Dynamic Stability Control system has been upgraded and makes sure that the driver doesn't enter bends too fast. It will automatically slow the Range Rover Sport in accordance with how much the speed needs to be reduced. Meanwhile, another system - Roll Stability Control, will try to prevent the Range Rover Sport from leaving the road and rolling by braking specific wheels and increasing the radius of the bend slightly. Under normal circumstances, it still feels quite wallowy but then, it is more of a cruiser than a Ferrari.

There are plenty of gizmos on board specifically designed to keep the Range Rover Sport on the straight and narrow even if you are off-road; such as Terrain Response, Hill Descent Control and positions on the transmission dial for sand and rock-crawling. This car is not just for taking the children to school.

There are two new engines in the 2010 line-up, which have been developed in conjunction with Jaguar: a 3.0 V6 twin-turbo diesel and a 5.0 V8 supercharged petrol unit. There is also a TDV8 3.6 engine, which has been carried over.

The LR-TDV6 3.0 replaces the old 2.7-litre diesel and offers 29 per cent more power and 36 per cent more torque and reducing the CO2 emissions by 8.3 per cent. This was the unit in the Range Rover Sport test car where it produces 245PS at 4,000rpm and 600Nm at 2,000rpm; this gives a 0-62 time of 9.3 seconds and a top speed of 120mph. It is a big car and when sitting behind the wheel it feels big and cumbersome and somewhat slow, so it comes as a real surprise to realise that the acceleration is enough to easily push you back into the seat with a thud.

All of the engines come with mated to a 6-speed automatic transmission with sequential (S) and steering wheel-mounted paddles. Fuel consumption figures for the Range Rover Sport test car are 25.2-, 34.9- and 30.7mpg for the urban, extra-urban and combined, respectively, with emissions of 243g/km.

The 5.0-litre engine is said to offer performance with superior quality and lower emissions. And so it does but, as I said earlier, these things are relative and a Toyota Prius driver would be horrified to learn this supercharged unit has a combined fuel economy figure of 18.9mpg and emissions of 363g/km. However, it does have a 0-62mph time of 6.2 seconds and a top speed of 140mph where legal, which is impressive.

And that is the word that sums up the Range Rover Sport – impressive. It is not just the size, which tends to make people take avoiding action; it is the whole package from the technology, the true off-road capability and the pampered but functional interior. There is no doubt, the Range Rover Sport still has it.