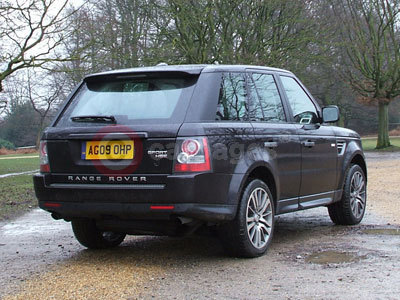 Inside the Range Rover Sport, there are new, deeper seats both front and rear. The cushioning is more sculpted than before and, for the first time, electrically-adjustable side bolsters are available as an option for the front seats. Even on the base model (if it can be called that) there is a great deal of leather on display, which is now available in a wider choice of colours. The Range Rover Sport test car came with perforated leather upholstery in Arabica, which as the name suggests, is a dark brown colour. It went well with the Bourneville Black exterior and lighter panels inside but I think it might begin to look tired around the creases, quite quickly.

The Range Rover Sport's cabin is described as snug, but from the driver's point of view, it feels more akin to the bridge of the 'Enterprise', such is the feeling of command and spaciousness. The fascia has changed quite a bit from the 2009 car and is now much tidier having lost 50 per cent of its switchgear and those controls that remain, have a smart, chrome-plated finish. The result is a cleaner layout that is a little less overwhelming.

Most of the controls have been incorporated into the onboard systems accessed via a touch-screen, which is also used for the HDD navigation system with 4x4 interface and something called 'towards guidance', which shows details from the actual road signage as you travel along. The system also has a voice control feature, posts for USB and iPods both of which can be controlled through the touch screen and I have to say that the whole system works brilliantly. The sat-nav catches up very quickly if you take another route and the sound system is so very easy to use. In fact I'd go as far as to say that it is the best so far…ever.

But it is not that, that attracted attention, nor was it the keyless entry and start, no, it was the surround camera system. The Range Rover Sport has no less than five digital cameras that give a 360 degree view around the car. Most people's initial reaction was to ask if it had any practical use. Well, yes; it makes it easier and safer to park and makes positioning trailers or horse boxes a great deal simpler. The cameras come on automatically whenever the car is started and work at speeds of up to 11mph. They also have a zoom function and individual views can be enlarged via the touch screen. I didn't try it but it would also be an advantage during severe off roading, where close-quarter manoeuvring, such as rock-dodging, can be a delicate matter.

There are also reverse tow and tow-hitch assist functions, via the screen with overlaid guide lines for car and trailer and can it be adjusted to suit the type of trailer; how many axles for example. High Beam Assist is one of the gizmos that I would actually use. We are used to automatic headlights but this goes a step further and automatically switches to full beam when the system’s light-threshold point is reached. But the clever part is that it also detect cars in front and on-coming traffic and instantly reverts back to dipped beam, which is great for twisting country lanes.