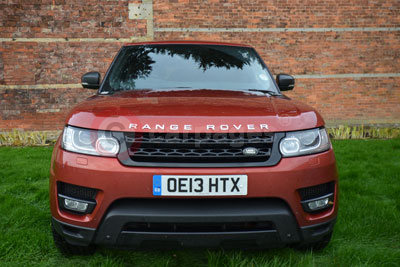 The second generation Range Rover Sport was announced in 2013, with the first models arriving in showrooms in the autumn of that year.

The Sport has always been the little brother to the real “Range Rover” sitting on the underpinnings of the old Discovery. But now this has been re-addressed and this model is a real Range Rover in its own right.

This model now features an all-aluminium body which has paid dividends on the weight front, a saving of around 420kgs over the previous model - which means better performance figures, fuel savings and a reduction in CO2 emissions - all models now feature stop/start technology.

We tested the Range Rover Sport 3.0 SDV6 Autobiography Dynamic finished in Chile Red which at the time of testing cost £74,995, plus £10,150 worth of optional extras which included the Rear Sear Entertainment System £1,500 and the Super Premium Meridian Signature 1700W Audio System for £5,000.

We tested the SDV6 which is powered by Land Rover’s 3.0-litre diesel engine - it outputs 292 hp / 600Nm. -All models feature the ZF 8-speed automatic transmission, unlike its bigger brother it features command shift as in the Jaguar F-Type - which is more engaging, allowing you knock and push the lever to change gear should the occasion arise.

Land Rover quotes a 0-62 mph time of 7.2 seconds and a top speed of 130 mph, which is very respectable. Sometimes the SDV6 can feel a little ‘laggy’ if you let it go off the boil, you can of course drop in the car into dynamic mode and then it will attack anything.

On average over 500 miles of mixed touring we achieving 32 mpg (less than its bigger brother, you shouldn’t drive it in dynamic mode) - on the motorway it made it into the forties - which was pretty good considering the car was laden with holiday luggage, dog, etc.

One thing that we could live without was the stop/start technology which powered off the engine when going from drive to reverse on a number of occasions.

Like its bigger brother the Range Rover Sport’s ride is excellent with the air suspension protecting you from the worst of British roads, but this time its more “sports” focused than its sibling - you feel more engaged with the road.

Where on ‘B’ roads you have to give the Range Rover some thought, the Sport wants you to swap comfort for something far more involving - and involving in a good way with an excellent degree of feedback. It would give some hot hatchbacks something to think about; again its width is its only hindrance in the country. Oh, and on this model it features Adaptive Dynamics - a handling pack which sharpens the steering, stiffens the suspension, improves the throttle responses and includes Torque Vectoring which can transfer more power to the outside wheels when cornering, which helps to push into the corners - although watch the larger wheel options if you think you might.

We left it in the dynamic mode most of the time - only really switching it off in town or when on the motorway.

As this was an Autobiography Dynamic model there is the Terrain Response II system which will automatically take care of your entire off road needs without any protest. It supports both a high ratio (on-road) and low ratio (off-road) transmission. The terrain response system takes care of the traction, the ride height, the transmission and the suspension - you do have the option of manual selection or you can dial in the terrain should you wish.

Having completed some off road courses with Land Rover, the limitation is usually more in the mind than the capability of the Range Rover, the Sport probably is not as good as the Range Rover off road - but as you would be splitting hairs - it would not swing me one way or the other.

Overall there is nothing really to complain about, I would prefer the V8 supercharged petrol as this would make one hell of a car, but as most people couldn’t live with the real life fuel consumption, which for a lot of the time would dip towards a single figure (what is the point in it if you do not use it), of course if you are sensible and someone that has no desire for out and out performance then the diesel models are excellent and will accommodate most people’s needs.

This is a 7-year+ news article, from our Land Rover archive, which dates back to the year 2000.

If in doubt check with your local Land Rover dealer as car prices and technical data will have changed since 2015.