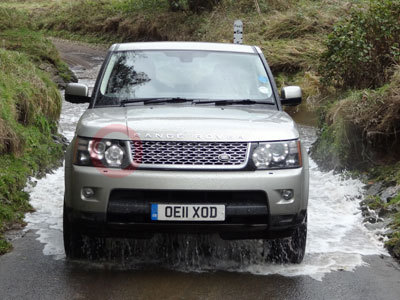 We last tested the Range Rover Sport in 2007, on that occasion it was the TDV8 Sport. This time we are reviewing the TDV6 version powered by a 3.0 litre SDV6 diesel engine, as seen in the Land Rover Discovery 4.

The Range Rover Sport was first introduced in 2005 and has remained a popular choice for business users, celebrities and the public alike. There will be a new model in 2013 which will address some of the vehicles short comings, such as only having seating for five. Until then we have the 2012 model Range Rover Sport.

We tested the top-of-the-range Range Rover Sport TDV6 Autobiography on an annual family holiday from Devon to Northumbria to see if it lives up to its reputation of a formidable work horse and luxury express. The on the road price at the time of testing was £66,720 plus options.

The Range Rover Sport is currently available with two power plants, a petrol 5.0 litre V8 which develops 510hp and 625Nm - with an official fuel consumption figure on the combined cycle of 19 mpg and Co2 emissions of 348 g/km. Top speed is 140 mph with 0-60 mph taking just 5.9 seconds.

We chose to test the more popular and perhaps more sensible diesel powered Sport which features a 3.0 litre SDV6 unit - it develops 256hp and 600Nm of torque. This equates to a 0-60 mph time of 8.5 seconds and a top speed of 124 mph, which in the UK is probably fast enough for most people. Especially when you look at the fuel consumption figures when compared to the petrol model, it returns 32.1 mpg on the combined cycle and CO2 emissions of 230 g/km making it a better choice for company car users and private buyers. The 3.0 SDV6 is EU5 compliant and is equipped with a diesel particulate filter (DPF) making it one of the cleanest diesel engines on the market.

The SDV6 is mated to the latest Land Rover eight speed automatic gearbox which is a delight to use; changes are seamless in all but the most difficult of conditions. It features the ‘Drive Select' rotary gear shift as seen in the likes of Jaguar and steering wheel-mounted paddle shifts, which we tended to leave alone.

We found the engine, perhaps not as refined as the outgoing TDV8 but it is a formidable power plant, that blends flexibility with performance and reasonable consumption. We were achieving between 26 mpg and 38 mpg touring, which was slightly better than the TDV8, what is interesting is that we tested an SD4 2.2 litre Range Rover Evoque a week later, and that was doing less to the gallon.

If in doubt check with your local Land Rover dealer as car prices and technical data will have changed since 2012.