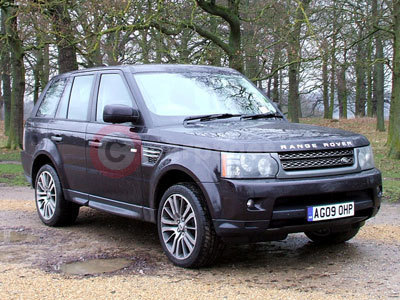 It would seem that despite the fact that there are now plenty of other luxury SUV Sports Tourers on the road, the Range Rover and Rover Sport still manage to set themselves apart.

Even the mighty Volkswagen Touareg and its sister car, the Porsche Cayenne, capable and luxurious as they are, don't have quite the same charisma. Perhaps it is a 'tradition' thing with the sumptuous Land Rover being the first modern SUV of its kind.

The first Range Rover was not without its teething troubles, such as the tailgate that was prone to rusting, but that particular problem was swiftly rectified and the Range Rover went on to bigger and better things in its overt portrayal of wealth and status.

In terms of price, the other smart SUVs have caught up and the Range Rover, especially in Sport format, is no longer the most expensive 4x4 on the road. That is, unless you want it to be.

Prices start from a relatively reasonable £50,695 on the road, and rise to £61,995 with lots of optional extra gadgets and toys. I say toys because some of them are solely for entertainment such as the DVD screens in the backs of the front headrests. The Land Rover flagship modes have always been a platform for new technologies that eventually filter down to the likes of the Land Rover Freelander and occasionally, other manufacturers. The new Range Rover Sport is no different and showcases the arrival of the surround-camera system and e_TERRAIN TECHNOLOGIES; the latter for better fuel economy and lower CO2 emissions.

There are new and improved engines and they do indeed offer improved fuel consumption and emissions, but these things are relative and the car is still unlikely to be labelled eco-friendly. That said, it is a further step in the right direction and so are the improvements to the manufacturing process. Since September 2006, Land Rover has been balancing carbon dioxide through an offset programme run by Climate Care.

The new Range Rover Sport is more about ride and handling improvements than a major overhaul. Although there have been some design changes, they are not very obvious and the new car remains every bit as boxy and imposing as the 2009 model.

However, Land Rover tells us that the new version has a more sculpted appearance, although the major feature difference, as far as I could tell, is the new two-bar front grille and the LED-illuminated headlight clusters. There have been slight changes to the bumper and wings to improve aerodynamics, while at the rear, the bumper has a slightly smoother profile. The side air vents echo the front grille, with two re-designed vanes.