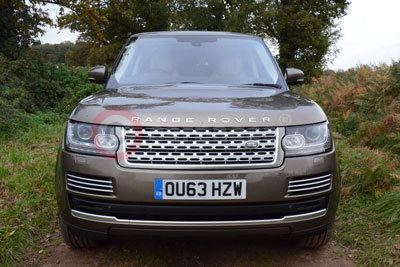 The Range Rover brand was first launched in 1970 with the current model being introduced in 2012 and arriving in showrooms in January 2013.

Initially it was aimed at the country set who found their Land Rovers a little too brash out and about - but it soon appealed to a broad spectrum of people who applauded it's on and off road manners and its peerless ability.

This model now features an all-aluminium body which has paid dividends on the weight front, a saving of around 350-430 kgs over the previous model - which means better performance figures, fuel savings and a reduction in CO2 emissions.

There is a choice of 3.0 TDV6 and 4.4 TDV8 diesel engines, plus the 5.0 Supercharged V8 petrol - with prices ranging from around £70 £150k depending on the vehicle specification.

We tested the Range Rover 4.4 SDV8 Vogue SE finished in Nara Bronze which at the time of testing cost £84,720, plus £9,270 worth of extras which included Rear Seat Entertainment System £1,900 and the Meridian Signature 1700W Audio System priced at £4,000

Land Rover quotes a 0-60 mph time of 6.9 seconds and a top speed of 135mph, which in our opinion is more than respectable.

On average over 788 miles of mixed touring we achieved 34.8 mpg - on the motorway this was nudging into the forties which we thought was pretty good considering the car was laden with holiday luggage, dog, etc.

The ride quality is excellent with the air suspension protecting you from the worst of British roads, and even off road its manners remain tempered. The other benefit of the air suspension is that you can set your own ride height, and are able to lower it to aid entry/exit or raise it to get over off road obstacles.

Even when you press on through demanding ‘B’ road bends body roll is kept in check, with the width of the Range Rover being more of a hindrance out in the country. Saying that it cannot defy the laws of physics and it does have its limits.

And if you need to go off road then the Terrain Response System will take care of your needs, without any protest that would leave other SUVs scrabbling or simply stuck. It supports both a high (on-road) and low ratio (off-road) transmission. The terrain response system takes care of traction, the ride height, the transmission, the locking and unlocking of the differentials (our car had an active rear diff for an additional £460) - you do have the option of manual selection - or you can dial in the terrain you wish to tackle.

Having completed some off road courses with Land Rover, the limitation is usually more in the mind than the capability of the Range Rover.

We have driven the supercharged petrol V8 and to be honest, if we did not have to worry about the fuel consumption (real world sub 15 mpg) we would opt for it - it is fantastic to drive with a wonderful sound track - but we would be far from disappointed with the TDV8 or even the TDV6 as all of these engines work well with the Range Rover and would be the sensible choice. The hybrid is probably best avoided as there is little point in it, bar the feel good factor for a mile or so, and then you might as well of stuck with a pure diesel model.

This is a 7-year+ news article, from our Land Rover archive, which dates back to the year 2000.

If in doubt check with your local Land Rover dealer as car prices and technical data will have changed since 2015.