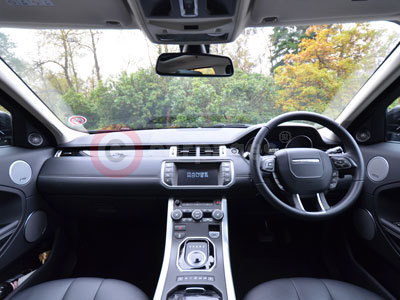 The Evoque is equipped with driver and passenger airbags, knee airbags, and side curtain and thorax airbags.

Like the larger Range Rovers, the Evoque is equipped with an electronic parking brake, activated via a switch in the centre console, which disengages automatically when the car moves off.

The Evoque is also equipped with other electronic active safety systems, including:

Our test car was fitted with the Meridian surround sound system as part of the £4,425 Lux Pack, it outputs 825W peak and is rather good, and should satisfy all but the most fussy of audiophiles.

We also benefited from an 8-inch high-resolution dual-view touch-screen display with an analogue/digital television tuner. This allows the front seat passenger to watch TV or a video on the move whilst the driver can view the navigation screen. With infra-red controlled headphones on, the driver is not disturbed with the front seats passenger's audio/visual choice. Overall the TV tuner is good but as you can imagine, it is difficult to watch one program over a long distance as the tuner seeks new transmitters.

The navigation system is supported by a hard disc drive - iPod connectivity, AUX, USB and 12v sockets allow easy connectivity and there is Bluetooth for phone and audio - oh and you also get a DAB tuner.

The Range Rover Evoque comes highly recommended but there is one caveat and that is fuel consumption, we had run a Range Rover Sport the week before which is not only heavier but more powerful and that was returning around 33 mpg where the Evoque was doing only around 28 mpg.

Plus it has now become very popular which depending on your point of view might be a negative point. Price wise depending on the specification the Evoque can be seen as expensive, especially the high end models, the options list is probably going to tug at the purse strings, we would have wanted all of the £5,880 extras but they really did add to the whole driving/owning experience.

If in doubt check with your local Land Rover dealer as car prices and technical data will have changed since 2012.