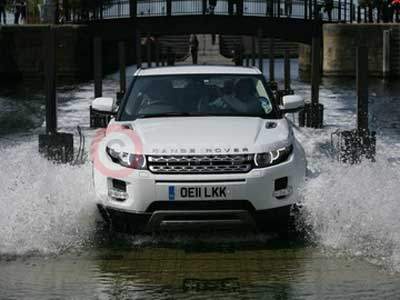 The Range Rover Evoque will be the star charity auction prize at the 2011 London Press Club Ball, with more than 400 journalists, media executives and VIP guests having the opportunity to bid for the cars.

Funds raised at the event will be used to support the Journalists' Charity, which was set up nearly 150 years ago and helps journalists and their families who fall on hard times.

The start auction prize is provided by Jaguar Land Rover, who will also provide a Jaguar driving experience at the Nurburgring racing circuit in Germany, as well as making a £15,000 donation to the Journalists' Charity.

The 2011 London Press Club ball will be hosted by TV and news presenter Moira Stuart in the Great Hall of the Natural History Museum on 13th October 2011.

For the fifth consecutive year, Barclays will be the main sponsor and Jaguar Land Rover is the automotive sponsor. PaddyPower will be sponsoring the champagne reception for the second year and easyJet is sponsoring the super raffle.

The event will be attended by chief executives, editors, journalists, television presenters and programme makers from major national newspapers and TV companies.

London Press Club Ball chairman Philippa Kennedy OBE said: "This is the seventh time the London Press Club has run the annual press ball and it has so far has raised more than £200,000 for the Journalists' Charity.

'The highlight of the evening is the fabulous 'money can't buy' auction which includes fabulous exotic holidays and events. The top item this year is a fantastic Range Rover Evoque."

Journalists' Charity chairman Bill Hagerty said: "The London Press Club Ball has become firmly established in the UK media's social calendar - and it's all in a good cause.

"The Journalists' Charity has been helping journalists in need and their families for nearly 150 years. It is the industry's own charity for those who are working, or have worked, in print, on air or online."

A spokesman for Jaguar Land Rover said: "Jaguar Land Rover is pleased to be supporting the London Press Club Ball in support of the Journalists' Charity at an exciting time for the company and for the launch of the new Range Rover Evoque."