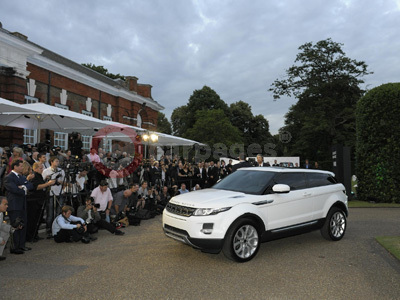 The new Range Rover Evoque has made a big impression online since the car was officially unveiled at Kensington Palace on Thursday 1st July 2010.

The launch party was broadcast live on the Land Rover Facebook page, and the video was streamed to a further 110 big-name automotive and lifestyle websites. Combined global viewers had exceeded 700,000 when measured the morning after the event, and over the weekend tens of thousands more watched on-demand. The number of launch party viewers worldwide has now passed 1.8 million.

Video highlights, interviews and excerpts from the launch were also published on Land Rover's official YouTube channel. On Friday 2nd July, this became the most viewed YouTube channel in the UK and remains the second most viewed channel on YouTube this week. It generated a further 65,000 combined views of the Range Rover Evoque launch party.

This incredible online audience witnessed George Lamb, Land Rover managing director Phil Popham, Victoria Beckham and Land Rover's design director Gerry McGovern unveil the new Range Rover Evoque, which will be the most compact and efficient car the company has ever produced when it goes on sale next year.

On Twitter, 'Range Rover' was one of the top ten most tweeted terms in Britain on the night of the launch and, during this period, around 6400 wall posts, comments, or 'likes' were added to the Land Rover Facebook page. Meanwhile, Google returned over 400 articles from established news networks, and in excess of 7000 blogs.

"We're delighted we were able to bring the Range Rover Evoque preview party to such a large online audience" said Phil Popham, Land Rover managing director. "It's vital that we reach the right audience online, and this was a breakthrough way to reveal a breakthrough car. The statistics show the enormous interest there is in the new Evoque and Range Rover as a brand."

Land Rover has now received more than 10,000 expressions of interest in the new Range Rover Evoque, both online and in dealerships - a quarter of which have been made in the last week. In addition a new micro site has been launched containing further details and updates on the new car.