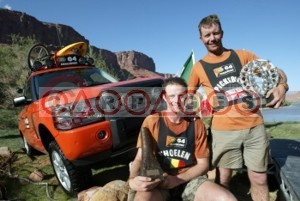 Moab, 26 April, 2003: The UK’s Tim Pickering was today honoured with the coveted Team Spirit Award in the inaugural Land Rover G4 Challenge. The 39-year old, from the Isle of Lewis in the Outer Hebrides, was voted as having displayed the best team spirit during the four week-long Challenge. The event took teams from the bustle of New York City, through South Africa and Australia, before finally ending between the famous red cliffs of Moab, Utah in the USA.

While not the winner in this inspiring global Challenge, Pickering was delighted with his award. "Being judged by my peers as having displayed the best team spirit is the most satisfying moment of the whole Challenge," beamed Pickering after the announcement. Only the competitors were allowed to vote for this award, and it was the plucky Brit who received the majority of votes.

Pickering ended the Challenge in 8th position, and was characteristically upbeat at the end of the event: "During the last month I have driven thousands of miles through unbelievable scenery. I have done amazing things, seen amazing places and made many friends for life. In this event winning really is secondary – just being here and part of it is more than enough for me."

In the end it was Belgian fighter-pilot, Rudi Thoelen, who was crowned as winner in the inaugural Land Rover G4 Challenge. The 31-year old, from Zoutleeuw, outwitted and outlasted 15 other men and women, who each represented their home nation in this exciting new Challenge.

The other competitors cheered and high-fived as the gutsy Belgian struggled his way up the concluding slope, before slapping his hand on the bonnet of a Range Rover, thereby cementing his first place, and claiming a new Range Rover as prize. Afterwards he slumped to the ground in exhaustion, his energies completely spent.

During the last four weeks, the Land Rover G4 Challenge has covered almost 4,000 miles. Teams competed on three continents and in four time zones in four consecutive stages. They have run, kayaked, biked and driven their way through some of the most striking scenery on the planet. There can be no doubt that the Land Rover G4 Challenge is the ultimate global adventure.