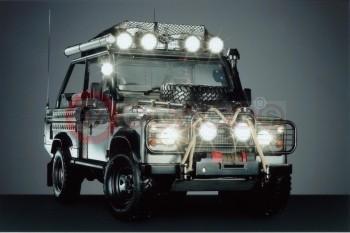 The specially-modified Defender will be on display in a special exhibition from 28 July. The Tomb Raider vehicle is based on a Defender 110 High Capacity Pick Up and looks ready for action in its grey paintwork while aluminium chequer plate protects the vehicle from knocks and scrapes. Special features fitted to enable Lara Croft to fulfill her role include a full roll cage with storage for maps, first aid kit and other equipment. The roll cage also acts as a mounting for the spare wheel and four driving lights while two further driving lights, are fitted to the front nudge bar. A snorkel air intake is fitted to enable Lara's vehicle to operate in extreme terrain. Ultimate off-road capability is assured by heavy-duty under shields and side-mounted 'rock sliders'. The Defender is also fitted with a de-mountable self-recovery winch with 'plug in' locations around the vehicle. For Lara's comfort a pair of rally-style seats with full racing harnesses are fitted. The functional dashboard provides a mounting for Lara's computer and mobile phone.

Production of the Tomb Raider film commenced in mid 2000 and was based at Pinewood Studios in Hertfordshire, UK. As well as being used at Pinewood, the vehicle was filmed at other locations in the UK and also in Cambodia for the jungle scenes. Tomb Raider was directed by Simon West and also stars Iain Glen, veteran actor Leslie Phillips and Red Dwarf star Chris Barrie. In the film

Lara Croft, daughter of Lord Croft, played by Angelina's real-life father Jon Voight, is tasked with rescuing the two halves of an ancient artefact hidden in Siberia and in a Cambodian tomb.

This is a 21-year+ news article, from our Land Rover archive, which dates back to the year 2000.

If in doubt check with your local Land Rover dealer as car prices and technical data will have changed since 2001.