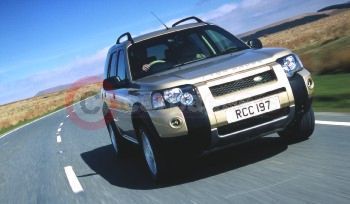 Land Rover’s award-winning Freelander, among the world's best-selling 4x4s since its 1997 launch, has been comprehensively improved and upgraded for 2004.

The changes include a new interior and major external revisions, including new face and tail. There is also an additional derivative, the Freelander Sport, the sharpest handling and sportiest Land Rover production model ever.

The most obvious enhancements are to the styling. The front bumper, headlamps and front grille are brand new, and adopt the distinctive family face pioneered by the new Range Rover. The new, twin-pocket clear lens headlamps are similar to those of the Freelander’s big brother, the Range Rover, and provide a higher light intensity – improved by 70 per cent. The bumpers are restyled and are now body coloured.

At the rear, the bumpers and lights are new. The bumpers are body coloured, and tail lamps have been repositioned higher on the rear bumper, improving their visibility and reducing the likelihood of them being obscured by road grime or off-roading dust.

The cabin of the 2004 Freelander has been comprehensively restyled, to improve comfort and the feeling of luxury.

The cabin doesn’t just look better. The feel of the materials has also been greatly improved.

There continue to be two body styles on offer: a three-door version, featuring a detachable hard-top or retractable soft-top, and a five-door.

As before, there is a choice of three engines. The two engines first unveiled in the 2001 Freelander are carried over: the 2.5-litre petrol V6 and the award-winning 2.0-litre four-cylinder turbodiesel. The original but much-improved 1.8-litre lightweight four-cylinder petrol engine also continues, as the entry-level option. The five-speed manual and five-speed automatic gearboxes are both improved for 2004.

For Europe, there is also a new Freelander model, the Sport. It rides on new 18-inch alloy wheels and uses lowered and firmer suspension to reduce roll and improve driver feedback. The result is more responsive driving behaviour on tarmac, and on smooth dirt or gravel roads.

The 2004 Freelander remains the king of off-roading among compact 4x4s. Its full-time four-wheel drive and a host of high-tech electronic systems, such as Hill Descent Control and Electronic Traction Control, allow the Freelander to wade through water, climb and descend slippery slopes, and give superb driver control when the going gets tough.