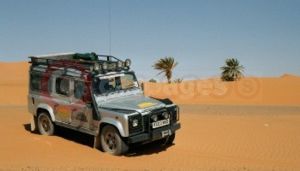 When the Land Rover Owners Adventure Club wanted to boost the performance of its lead vehicle for an expedition to the mountains and deserts of Morocco, Superchips provided the ideal solution. By reprogramming the electronic control unit (ECU) of the Defender 110 Td5, Superchips increased power output by an impressive 20 bhp, while mid-range torque received a lift of around 40 Nm.

"The incredible mid-range torque gives greater flexibility in the rev range and makes driving long distances less of a chore," said expedition leader Vince Cobley, who has 20 years’ experience in off-road expeditions and competitive events around the world and heads up one of Europe’s leading off-road schools, Pro-Trax.

"A Superchip is a must if you intend to travel long distances with full loads over mountainous terrain," Vince continued. "Not only will you be able to keep up with the V8’s; you’ll also have a break each time they stop to refuel. That’s because they’ll have to fill up three times compared to your once. All in all, it’s the best £500 you could spend on your 4x4."

Two Morocco ‘Adventure Safaris’ are scheduled for 2004, the first departing on April 3 and the second on October 9. Each trip will last for 17 days, including 10 in Morocco. The rest of the time will be taken up by return ferry crossings from Portsmouth to Bilbao and the drive from there to Algeciras, near Gibraltar, and back. Each convoy of up to 22 Land Rovers will drive for around 3,250 miles, including 1,700 in Morocco. One of the many highlights of the trip will be the dazzling dunes of Erg Chebbi, the highest Saharan sand dunes in Morocco.

"The rigours of this trip should not be underestimated," said Vince. "A great deal of preparation is required, and for anyone who is new to this kind of driving, Pro-Trax is offering a 20 per cent discount on its weekly 4x4 driving courses. Having led a number of Morocco Adventure Safaris, I know from experience that for many people it’s the trip of a lifetime."

Superchips originally converted Vince’s current Land Rover for similar expeditions to Morocco in April and October 2003. The company also converted his Td5 ‘Tomb Raider’ model, which led two Morocco trips in 2002 and was the lead vehicle in the 2001 Britain to Bosnia Rally, a semi-competitive event involving around 25 vehicles, which raised over £20,000 for the Mines Advisory Group and carried aid and supplies to Sarajevo. The same vehicle also led Pro-Trax weekend expeditions into the Welsh mountains.

"The improved power and torque has been invaluable on these very demanding journeys and it’s a great bonus for everyday driving. The difference is amazing and I’m having another Land Rover Superchipped, as well as my BMW X5," said Vince.

Land Rover is just one of many makes that are catered for by Superchips – virtually every make of car can benefit. By reprogramming the ECU, Superchips can increase power and torque by as much as 30 per cent, without compromising fuel economy. The job takes around 45 minutes and prices start at under £300 – far cheaper than trading in for a higher-powered car.

Over the past 27 years more than half a million vehicles, including 150,000 in the UK, have been ‘Superchipped’. All engine types are catered for, whether normally-aspirated (non-turbo) petrol, turbo petrol or turbo diesel. Buckingham-based Superchips provides conversions through an 85-strong nationwide network of fitting centres. The company also operates a fleet of mobile units, which carry out conversions at customers’ homes or places of work.