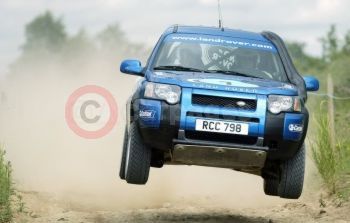 The organisers of the British leg of the World Rally Championships (WRC), which kicks off this weekend (16-19 September), have chosen Land Rover vehicles to fulfil critical roles in ensuring the successful and safe running of the event.

Rally-prepared Freelanders and Land Rover-based Bowler Wildcat off-road race cars will be used as safety cars, running the stages at near race speeds before and after the rally cars to ensure competitor and spectator safety, whilst Range Rovers with the latest on and off-road navigation technology will be used by senior FIA officials.

The Freelanders are equipped with 2.5 litre, 24 valve, V6 petrol engines boasting 177bhp and 240Nm of torque, as on the standard models, with only modified MacPherson suspension struts (front and rear) and safety features such as a welded safety roll-cage to distinguish them from showroom vehicles.

During a trial session at Land Rover’s proving ground in Gaydon, Warwickshire, ex-Scottish rally champion, David Gillanders said: "These are the most capable Freelanders in the world. They can take everything thrown at them, and more, making them ideal zero cars."

FIA officials at Rally GB will also find that they are able to tackle the terrain with ease, as they will be travelling in Range Rovers with significantly enhanced communications technology for 2005, which are due to appear at the Paris Motor Show later on this month. These vehicles come equipped with added off-road technologies such as a 4x4 information screen located on the touch-screen driver interface, which brings useful off-road information to the driver’s fingertips, including compass navigation ‘way marking’, where off-road routes taken are recorded on-screen, enabling easy navigation back to base.

Bowler Wildcat vehicles, which are purpose built race-cars designed to compete in top level off-road racing events such as the Paris to Dakar Rally, and which are based on the Land Rover Defender and Discovery models, will also participate as safety cars in the Welsh Rally GB.