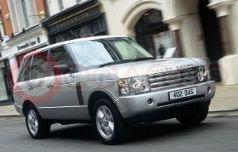 Land Rover goes into the British International Motor Show celebrating a new sales record in the UK on the back of the huge success of the new Range Rover.

Another success in the UK has been the Defender, with 887 sales during September, improving on the 2001 figure by more than 33%. The Discovery also continues to be a sales success following the launch of the new model in July, with over 9,000 models sold in the UK this year.

During September alone, the company’s global sales increased by 11% on the same month in 2001, with an increase of 73% in the North American market. The increase in North America is largely due to the success of the Freelander V6 since its launch in the region in late 2001.

Nearly 13,000 Freelanders have been sold in North America in 2002, increasing the model’s global total for the year to 58,900, beating last year’s total for the same period by nearly 10% and confirming its position as the fastest selling Land Rover in the company’s history.

Land Rover’s managing director, Bob Dover, said: "It is very pleasing to return to the Motor Show in Birmingham, Land Rover’s home show, and announce that our flagship, the new Range Rover is a major sales success in markets around the world. That is not to say that this year hasn’t been challenging, it has, but Land Rover is based upon a foundation of magnificent products and a fine workforce – as this year’s achievements illustrate."