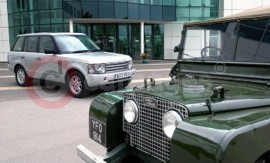 The Land Rover, originally built in 1948 and known since 1990 as the Land Rover Defender, has been named ‘the greatest car of all time’ by BBC TV’s Top Gear.

Top Gear viewers were asked to vote by telephone for nine vehicles short-listed by the show’s team of experts, and following nine weeks of closely contested competition, the Land Rover beat its rivals to the accolade with 29 per cent of the vote. Co-presenter on the show, Richard Hammond, who championed the Land Rover cause, said: "I knew it was a winner from the outset. The Land Rover has all the elements of an invention worthy of the ‘greatest of all time’ accolade – function, design, durability, engineering supremacy and soul."

Matthew Taylor, Land Rover’s managing director, added: "The Land Rover is a motoring icon, noted for its good work around the world. Nearly two million have been sold during its 55 years, two-thirds of which are still in use today. Owners of the vehicles and employees of the company around the world should be very proud of this accolade, bestowed upon us by a very tough group of critics – the viewers of BBC’s Top Gear."