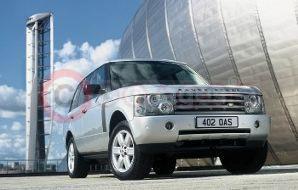 Paris, 26 September 2002 – As Europe’s leading specialist manufacturer of 4x4 vehicles, Land Rover is presenting a full range of its products at the 2002 Mondial de l’Automobile. The new Range Rover is the main attraction backed up by the latest 2003 Discovery, the popular Freelander and the iconic Defender.

Two examples of the new Range Rover will be shown at Paris – showcasing both the V8 petrol and 6-cylinder diesel engines. The new Range Rover combines legendary Land Rover talents with a series of technical innovations that establish its position as a peerless luxury off-roader.

The Range Rover was the world’s first luxury off-road vehicle and is now in its third evolution. It’s against this background of innovation, style, prestige and sheer ability that the latest car to wear the famous Range Rover badge was launched and the latest Range Rover scales new heights in terms of luxury and capability both on and off-road.

Its shape combines modern lines with familiar Range Rover styling cues, such as the clamshell bonnet with castellations, horizontally split tailgate and upright front end. Distinctive features such as the high-tech jewelled headlamps and tail lamps – and the dramatic front wing power vents add a futuristic slant to the evolutionary shape. Despite its instant recognition factor, it has no body panels in common with its predecessor. In fact, every part of the car is new.

Longer, taller and wider than the previous model, the new Range Rover has correspondingly more interior space and even stronger on-road presence. Greater ground clearance also helps to give it even higher off-road limits than its hugely capable forebear, while the vast increase in torsional stiffness offered by the monocoque body translates into superb on-road refinement and composure.

As with the original Range Rover, launched in 1970, the third generation model has permanent four-wheel drive and a two-speed transfer gearbox offering a low range for off-road use and a high range for normal driving. A new torque sensing centre differential continuously and automatically changes the torque bias between front and rear axles depending on available traction.

Land Rover’s new 2003 Discovery is displayed in Paris with both V8 petrol and Td5 diesel engines. The latest Land Rover Discovery features a new look, echoing the new Range Rover, a revised interior with new trim colours and a number of significant technical enhancements designed to improve both on- and off-road ability.

The new 2003 Discovery introduces significant improvements including new front end styling inspired by the new Range Rover, revised rear light clusters and three all-new interior trim colours. Response and handling are improved by revised braking, steering and suspension systems and off-road capability is enhanced by the availability of a centre differential lock. The latest Discovery keeps its iconic profile and retains the stability, assurance and comfort conferred by its dynamic control systems such as Active Cornering Enhancement (ACE) and Self Levelling Suspension (SLS).

The new 2003 Discovery retains the versatile seating arrangement of previous models. Up to seven passengers can be accommodated in three rows of forward facing seating in a ‘stadium’ arrangement so that each row is higher than the one in front. This, together with the provision of high mounted ‘alpine’ lights, adds to the feeling of spaciousness – a distinctive feature of the Discovery. Reflecting its practical nature, the new 2003 Discovery has plenty of space for oddments with a large centre console box, glove box, door bins and roof mounted stowage nets.

Park Distance Control (PDC) is now available giving an audible warning of obstacles when reversing. New roof bars with a thicker profile can also be specified – as well as being a practical load carrying feature, the new roof bars help define the new look of the latest Discovery. Complementing the appearance of the new 2003 Discovery, a range of newly-designed alloy wheels is available and further personalisation can be achieved using a range of specially developed accessories.

The revised profile of the new front bumper not only refreshes the styling of the new Discovery but also improves its cross-country agility with an improved step height. The availability of a locking centre differential option further enhances its capability in extreme off-road conditions. The latest models retain four-wheel Electronic Traction Control (ETC) and the Queen’s Award-winning Hill Descent Control (HDC) system. These features, embodying more than 50 years of Land Rover 4x4 experience, give the Discovery supreme confidence in any off-road situation.

Represented at the Mondial de l’Automobile by both three and five door models fitted with the four-cylinder Td4 diesel engine and V6 petrol engine, the latest Freelander models include the new, top-of-the-range Freelander HSE featuring a new high contrast, black and Alpaca interior trim. The Freelander HSE is fitted with a new style sports seat offering greater support and comfort.

Freelander’s stylish and functional appearance is enhanced by new 3D badging while occupant comfort is improved by a revised heating and ventilation system offering improved airflow with lower fan noise levels. A variety of cup holders, a range of in-car entertainment systems and a factory-fitted satellite navigation system are all offered on the latest versions. Petrol-engined Freelander 03MY vehicles are also fitted with a new fuel tank offering a 10% increase in range.

The new in-car entertainment systems include the option of a head unit with a single slot CD player and up to four speakers. Black carpet is now specified for Defender to enhance its contemporary appeal and vehicles fitted with a cubby box now feature twin integrated cup holders. Load retention rings are now fitted in the cargo compartments of hard top and station wagon vehicles.

The specification of the new top-of-the-range Defender SE has a number of unique, premium features including a ‘Brunel’ gunmetal finish on the grille, headlamp surround and interior switch panel, black leather covered control knobs and steering wheel and seats in black leather and ripstop trim. A mesh storage pocket is fitted to the rear end door while the cold climate pack, consisting of heated windscreen and heated front seats is fitted as standard. Side runners and smoked side and front indicator lenses provide further external differentiation. The SE derivative is available in Defender 90 Hard Top and Station Wagon and Defender 110 Hard Top, Station Wagon and Double Cab styles.

The features of the latest Defender 2003 model year vehicles build on recent significant upgrades. These include the deletion of the bulkhead on the Defender 90 County Station Wagon to improve space in the cabin and provide more front seat recline, a revised facia with a new centre console and new switches.

A recent major change for the Defender station wagon and hard top variants has been the introduction of a new rear end door. The new door is made from zinc plated steel with both the inner pressing and outer panel being one piece for greater strength with improved consistency, corrosion protection and sealing.

The performance and handling of the Defender is improved in both on- and off-road environments with the option of the ABS braking system combined with 4-wheel Electronic Traction Control. Other options include metallic paint, air conditioning and a range of towing equipment. A choice of wheels and tyres is available including ‘Freestyle Choice’ alloy wheels with 235/85 tyres, heavy duty wheels for 110 and 130 models and a range of specialist off-road tyres.