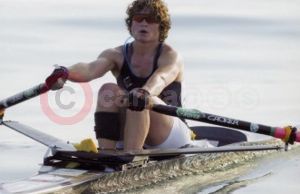 Setting off in the dawn light, Guin celebrated her arrival at the coast of France just three hours 14 minutes later. During the crossing, she had to brave the busy shipping traffic in the Channel including cross-channel ferries and lumbering container ships and tankers – the wakes of which could easily have swamped her frail craft. Guin also had to tackle the tide and sea turbulence caused by the numerous sand banks on the route.

The attempt had almost been given up this year due to weather conditions and the need for a channel pilot but the long hot summer of 2003 eventually came good and provided the right conditions for the trip.

Her racing boat is designed to be used on the rather calmer waters of the Thames rather than on the open seas. Built by Resolution on Rhode Island in the United States the carbon fibre boat weighs just 14 kg and can be lifted easily by one person.

Guin depends on Land Rover Gear for her pre- and post-event clothing. Using the latest fabrics and designs, Land Rover Gear is both wind and rain proof while being light, comfortable and stylish. However, you don’t have to be a cross-Channel rower to enjoy Land Rover Gear as the versatile range is available from Land Rover dealers around the UK as well as in other parts of Europe and overseas. Even if you need comforting after a hard day, the Land Rover Gear range includes a teddy bear for you to cuddle up to.

Speaking of her involvement with Land Rover Gear, Guin said: "Pulling on a warm Land Rover Gear fleece is a great comfort after hours on a cold sea but besides that everyone at Land Rover Gear backed me all the way when a lot of people told me that what I was attempting was impossible. I couldn’t have done it without their help."

Guin isn’t resting on her laurels but is planning to take her boat and herself to their limits. Among her exciting plans is to race the famous Severn Bore. Whatever she does, Land Rover Gear will be there to help.