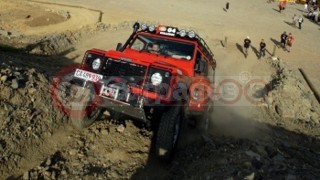 South Africa, 06-12 April 2003: Stage Two of the Land Rover G4 Challenge began with a culture shock for the 16 competitors. After experiencing temperatures of –20 degrees Celsius in upstate New York, they were faced with the 30 degree heat of Cape Town.

The stage began with the announcement of the eight leading competitors following Stage One. Canada’s Jim Kuhn was named as the early leader, followed by Belgium’s Rudi Thoelen and the UK’s Tim Pickering. Each of the top eight then chose a teammate from the remaining eight competitors. Following the selections the teams lined up for the Cape Town Maximiser in the following order.

The Cape Town Maximiser was described by Competitions Director Simon Day as "the toughest event yet". The first task was to scale Signal Hill, a vicious, rocky ascent that overlooks the Cape of Good Hope. This was followed by a tricky mountain bike descent, a technical kayak course and a 4x4 driving course.

As predicted by Day, the Maximiser was not without drama. While competitors prepared themselves for the Strategy Pit the next morning it was revealed that top ranked competitor, Canadian Jim Kuhn, would retire due to injury. Kuhn sustained lacerations to his left elbow, left knee and right wrist after a high-speed tumble off his mountain bike. He would be replaced later in the week by the Canadian runner-up from International Selections, Kitt Stringer.

Over five days the competitors travelled southeast to Cape Agulhas, the southern most tip of South Africa, then on to the spectacular coast of Kranshoek for the final Maximiser of Stage Two.

Along the way they battled it out through beautiful but challenging terrain as they strove to visit as many Hunter locations as possible, in the order they predicted, and thus collect the points that would elevate them into contention for the top eight ranked competitors at the end of the stage.

Hunter locations along the way involved donning wetsuits and climbing helmets and plunging seven metres into a gorge and navigating along beaches and into caves marked by the smallest of openings. Of the latter challenge, McCarthy of Ireland said "I really enjoyed running along the beach it reminded me of my home town of Dingle in Ireland."

On Day Four of the South African journey, the competitors were to experience one of the most interesting and amusing days of the Challenge so far. The Hunter located at the Gouritz River Bridge involved a 65-metre ascent by jumar (a technique requiring the athlete to "walk up" the rope, while sliding the handgrips or ‘jumars’) to a bridge and then bungee jumping off the other side. Upon reaching the top of this obstacle, USA’s Nancy Olson commented, "It took me ten minutes to jumar up here and now you’re asking me to descend again in half a second."

By the final day of the stage, some of the competitors were admitting to feeling the pace. "It’s definitely getting harder to get up in the morning," said Australia’s Guy Andrews as he gathered kindling for his storm kettle. "But although I’m tired, I’m feeling physically stronger than I did earlier in the week."

This was just as well, as Competitions Director Simon Day explained the final Maximiser would involve a six kilometre mountain bike trial, a four kilometre cross-country run followed by a sprint across a rocky beach and finally, a steep, rocky scramble to the finish in what Day described as "not a long test, but a difficult one."

The Kranshoek coastline provided a dramatic backdrop, but the competitors had little time to enjoy the view. When all competitors had completed the course, the Maximiser results were as follows:

France’s Franck Salgues was the first to complete the course over Australia’s Guy Andrews. These two men have established themselves as the Challenge’s hard men. Both are exceptionally fit and combine a high level of mental toughness that will makes them difficult to beat in any physical contest.

While Turkey’s Cuneyt Gazioglu described the event as "not too difficult", other competitors found it more demanding. "It was really, really hard," said the USA’s Nancy Olson, "I just didn’t have the strength in my quads and calves today. I pushed really hard yesterday and I guess I paid for it today. But I have a couple of days rest now and that’s all I need to get my legs back in shape."

At the completion of the South African Stage of the Land Rover G4 Challenge, the competitors were ranked in the following order:

After the dramatic landscape of South Africa, the competitors are now bound for Australia where they will experience the heat, remoteness and beauty of Western Australia’s PiIbara Region. They will complete five days of remote activity before flying to NSW for an Urban Maximiser held around the famous landmarks of Sydney.

The Land Rover G4 Challenge is a unique event that places extraordinary demands on the competitors and their vehicles. Following five days in the Pilbara Region of Western Australia and One day in Sydney, the teams will move to Las Vegas and the Moab trail for the final stage of the Challenge which will finish on 26th April.