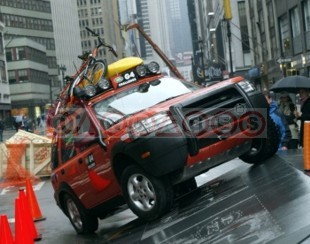 New York City, March 31st 2003: "I've met them all - Cruise, Pacino. They've all shot here in New York, but what you guys are doing is the best thing I've seen in 16 years with the NYPD." Officer Wallace of the New York Police Department's Traffic Division has worked many movie sets on the streets of Manhattan. But today he and his team have closed off seven blocks of Broadway for the opening day of the world's newest and most challenging adventure, the Land Rover G4 Challenge.

The UK’s Tim Pickering could not have acquitted himself better, going into the lead overnight as the teams headed north out of New York to the first night’s campsite in the Catskill Mountains. He and team mate Paul McCarthy, representing Ireland, put in a polished performance during the 4x4 driving and navigational challenges in Manhattan, and ended the day delighted with their progress: "There’s a very long way to go, but we couldn’t have made a better start," said a jubilant Tim. "The 4x4 driving course on Broadway was amazing – I never thought I would be putting a Land Rover through its paces in downtown New York! What an experience!"

Featuring smoking man hole covers, ‘Don't Walk’ signs and strategically placed yellow cabs, the 4x4 driving course was designed and built on site overnight by Land Rover G4 Challenge Competitions Director, Simon Day and his team, who borrowed heavily from traditional New York symbolism to create a true off-road driving challenge for the 16 international competitors. First up was a giant wooden case from which each team 'unpacked' their Land Rover Freelander before they began the driving section of the course, parallel railway sleepers with crucial sections missing, a ramp onto which they drove with just one wheel, avoiding a New York yellow cab, and a daunting turntable sat atop a giant drum of cable.

In the next 4 weeks, competitors from every continent will contest a unique mix of driving and adventure sports, spiced with a liberal dose of mind-bending strategy, in four consecutive week-long Challenge stages - New York and the Eastern Seaboard, South Africa, Western Australia and finally, the Wild West of America. Until the Challenge ends on April 26th in the Moab desert, the competitors and 130-strong organizational team will experience extremes of weather, extremes of temperature, remote campsites and boil-in-the-bag food, all laced with a liberal dose of jetlag.

"New York is such a cultural centre, an iconic city and a wonderful location for the start of the Land Rover G4 Challenge," enthused Matthew Taylor, Managing Director of Land Rover, before he announced the 'off' amid a spectacular and specially-designed 4x4 driving course constructed throughout the previous night.

Arguably the hardest test of the day came before the teams even began to tackle the 4x4 obstacle course. Based on scores achieved at the International Selections event in the UK two months ago, the top eight performers had to pick a team-mate from the remaining eight - without knowing the relative scores of those eight competitors. The pairings will stay together for the rest of the first Challenge stage this week, before their Stage One scores will be used to determine who does the selecting for the second Stage in South Africa, starting on April 6th.

"It was a bit like being picked for teams at school. Fine if you are doing the picking, or get picked quickly, but hard if you are left on your own," said Paul McCarthy. To add to the thrills, once the 4x4 driving course was completed, the teams then had to complete an orienteering course on foot through Manhattan, using their newly refined navigational skills to find vehicles hidden at landmarks that included Grand Central Station and the Empire State Building.

Two hours after the start of Land Rover G4 Challenge, first results were posted. Sure enough, the later teams profited from watching the others' mistakes. Pickering and McCarthy won the ‘New York Maximiser’, with Erik den Oudendammer of the Netherlands and Cuneyt Gazioglu of Turkey snapping at their heels in second place. Third place went to Chester Foster (South Africa) and Guy Andrews (Australia). Alberta Chiappa (Italy) and Inigo de Lara (Spain) wound up in equal seventh, with it all to do in the next few days.

A four-hour drive north to the first campsite then awaited the teams as they headed out of the city in convoy to the snow-covered Catskill Mountains, hoping for a good night’s sleep before remote competition began in earnest at dawn on Monday. "There's been a foot of snow and temperatures are well below freezing," said Event Director, Nick Horne. "It's going to sort out the men from the boys (and women from the girls!) very quickly."