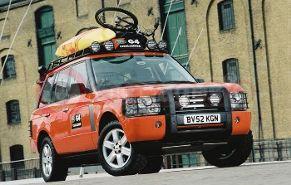 Although mechanically identical to the Land Rover models in any dealer showroom, the Land Rover G4 Challenge cars are fitted with a range of optional expedition equipment including winches, roof racks and GPS units, enabling the cars to cope with the extreme off road challenges they and their crews will meet during the four Challenge stages – each one taking place in a different time zone. The additional kit also enables competitors to virtually live in their cars during the week-long stages, which take in some stunning scenery and feature both remote areas and urban centres.

Competitors will be assigned a different Land Rover model for each stage of the Challenge. For the first stage, they will travel from New York to Quebec in Freelanders, then flying from Canada to Cape Town, South Africa, for the second stage. There they will pick up the Defenders that will take them across Lesotho and through to the Drakensburg Mountains. Stage three sees the competitors in Range Rovers starting out from Sydney into the Australian outback, and for the fourth and final stage they will each take the wheel of new Discovery, crossing the canyon landscape between Moab and Las Vegas in west USA.

All the Land Rover G4 Challenge cars have been built on the Solihull production line, and then customized for the competition with optional specialist equipment fitted at Land Rover Vehicle Operations at Gaydon.

The nations participating in the 2003 inaugural Land Rover G4 Challenge are: UK, USA, Canada, Japan, Russia, South Africa, Australia, Germany, France, Spain, Italy, Turkey, Ireland, the Benelux countries, and the Gulf region. Participants for the Land Rover G4 Challenge have been enrolling on line using a dedicated website – www.landroverG4challenge.com – or through Land Rover dealerships in participating countries. Successful applicants will endure several days of arduous outdoor testing later in the year in events designed to pick a national representative to take part in the global competition.