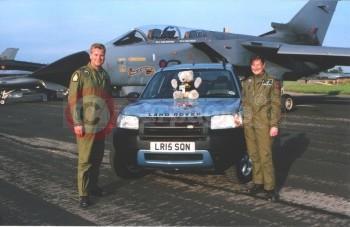 Land Rover is heading skywards with the handover of a Freelander Td4 to the Tornado display team from XV (R) squadron of the Royal Air Force. The Freelander was presented at the Royal International Air Tattoo at RAF Fairford and will be driven by the crew of the Tornado GR4 aircraft: Squadron Leader Colin McGregor and Flight Lieutenant Andrea (‘Andi’) McColl.

The Freelander is the UK’s best-selling 4x4, with a top speed of up to 113 mph while the Tornado GR4 is the RAF’s latest multi role jet aircraft with a top speed of 1,452 mph. Adorned with the emblem of XV (R) squadron, the Freelander will be used by Squadron Leader McGregor and Flight Lieutenant McColl at the Fairford Royal International Air Tattoo and at the Farnborough International Air Show.

Based at RAF Lossiemouth in Scotland, the display aircraft from XV (R) squadron has been christened ‘The Spirit of Speyside’ in recognition of the work done by RAF personnel on the base for local charities including Rachel House, a children’s hospice and respite care centre. Both the Freelander and the Tornado will often have a third passenger in the shape of ‘Brucie Bear’ who is rapidly accumulating flying hours around the world. At the end of the display season the experienced ‘Brucie’ will be auctioned for charity.

The McGregor family are no strangers to the fast life – Colin’s brother Ewan stars in the latest Star Wars trilogy as Obi-Wan Kenobi, while Andi has notched up an impressive number of ‘firsts’ in her RAF career: the latest being the first female navigator in a fast jet display aircraft.

Mike Wright, managing director of Land Rover UK said: "Land Rover is very pleased to support the team, especially given their strenuous efforts to raise money for local charities on Speyside. The area around Lossiemouth is almost a second home for Land Rover with both new Discovery in 1998 and, more recently, the new Range Rover being launched in the area. We all wish the Tornado crew well, both with their spectacular display this season and in their future careers."