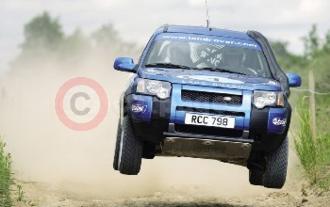 A Land Rover Freelander has been selected by one of the hottest new prospects on the rally driving scene as his vehicle of choice in this weekend’s Granite City Rally.

Matthew Wilson (17), son of motorsport great Malcolm Wilson, will pilot a special rally-prepared M-Sport Land Rover Freelander during the event, which is contested over 44 miles of gruelling terrain and takes in the fearsome forest stages south of Aberdeen.

Fresh from circuit-racing success in the Formula Renault Series and having performed well in his first two rallies, Matthew is looking forward to the challenge: "The Granite City Rally is not a qualifying part of the Scottish Rally Championship without good reason - it demands respect from even the most experienced driver. However, this year there are two new stages which will make the route fresh, exciting and help level the field between younger drivers and those veterans who compete every year."

Completing his third rally will also qualify Matthew for his professional licence but he remains characteristically grounded: "I’m treating each rally as a challenge that must be overcome and an opportunity to gain experience but the Freelander may well give me a useful competitive edge in this weekend’s competition."

The M-Sport Freelander is based upon a standard V6 model - which is powered by a 2.5-litre petrol engine - but also incorporates a full roll-cage for safety and an uprated suspension system and brake pads to deliver improved handling in the heat of competition – making it the most capable Freelander in the world.

Aberdeen’s Granite City Rally, on April 17, has a strong heritage, having grown from a small, local navigational challenge into a fully-fledged, and internationally recognised, forest rally. Now in its 35th year it attracts many leading drivers with its challenging course and welcoming atmosphere.