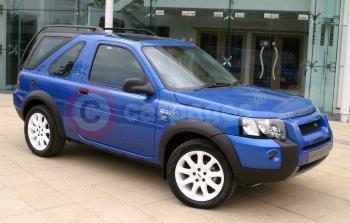 Sunday Times Motor Show Live, Birmingham, 25 May 2004 - Making its debut at Land Rover's home show is the proposed Freelander rally limited edition (LE) that could go on sale in the UK from September 2004, depending on public reaction and interest in the vehicle.

The concept was inspired by the reconnaissance vehicles used by Colin McRae and Carlos Sainz during the 2001 World Rally Championship, and evolved when Land Rover and M-Sport Ltd teamed up to introduce these vehicles at the Pirelli British Rally Championship (PBRC) as a spectator and safety control vehicle.

The Freelander starred at each of the 2003 Pirelli British Rally Championship events with ex-Scottish rally champion David Gillanders at the wheel. During a trial session at Land Rover's proving ground in Warwickshire, David Gillanders said: "This is the most capable Freelander in the world. It can take everything thrown at it and more".

Land Rover UK managing director, Phil Popham said: "The popularity of the Freelander rally vehicles at various events during the past twelve months convinced us to build a one-off LE to gauge public reaction. That's what we have done for Birmingham and we look forward to hearing what visitors to the show think of it."