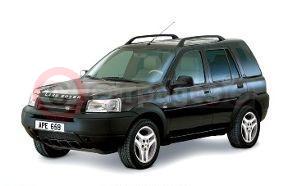 Celebrating its fifth birthday this year, the Land Rover Freelander goes from strength to strength. The latest models of the Freelander are on display on the Land Rover stand at the British International Motor Show including the new top-of-the-range Freelander ES Premium. The Freelander, first launched in 1997, received significant revisions in 2000. These changes included new engines - a 2.5-litre, 130 kW (177 PS) V6 petrol engine and a 2.0-litre, four-cylinder common-rail, Td4 82 kW (112 PS) turbodiesel engine. The V6 engine is mated to a five-speed automatic gearbox with CommandShift™ gearchange as standard, which is also available on the diesel engine as an option.

New for 2003 is a revised badging style with 3D relief lettering while the Freelander's external styling now features black exterior mouldings - including the front and rear bumpers, wheel-arches, sill finishers, tail door cladding and fuel filler cap. The lenses of the rear indicator lamps and side repeaters have a clear/smoke effect enhancing the external appearance.

The latest Freelander models are offered with a choice of either Smokestone or black interior trim. Black enhances the premium feel of the Freelander interior and, exclusively on the new ES Premium model, can be combined with pale beige Alpaca for a contemporary, high-contrast, prestige interior. The centre console and instrument binnacle are finished in black to cut down on reflections and to colour co-ordinate with both black and Smokestone. The accents on the air vents, heater control surrounds, and speaker surrounds are in ‘Kingdom’ gunmetal finish on three-door models and black on five-door models. Centre panels on leather seats on the three-door will be in ‘Kingdom’ gunmetal. A new Marl fabric trim replaces Tapestry on the five-door models.

The Freelander ES Premium – newly introduced for 2003 - features black and Alpaca trim. Alpaca is used on a new premium sports seat that has new seat foams, revised headrests and larger side bolsters on the cushion that is also 15mm longer. The Freelander ES Premium has Alpaca carpets, door casings and door pulls. Alpaca is also combined with black on the leather-trimmed steering wheel.

Land Rover is introducing two new models powered by the 1.8 litre petrol engine – the Serengeti and the Kalahari. Based on the popular S derivative, the Freelander Serengeti features 17-inch alloy wheels, privacy glass, air conditioning and a CD player. The Kalahari is based on the Freelander GS and includes 17-inch alloy wheels, leather/Alcantara seats, CD autochanger and powerfold mirrors. The five door model has an electric sunroof as standard while the three door version has sunblinds and a hard load space cover. The Freelander Kalahari features two additional bright new colours – Borrego Yellow and Tangiers Orange.

The latest Freelanders feature front and rear cupholders. The optional front folding cupholder is integrated into the centre of the facia top and opens at the touch of a button to reveal receptacles for two beverage containers. The rear retractable cupholder – standard on the new Freelander ES Premium derivative, is built in to the centre armrest and can also accept two containers. Both cupholders are capable of taking beverage containers of any size – including large 'gulp' size cups.

The standard in-car entertainment system is centred on a CD-compatible radio/cassette head unit with six speakers while a premium head unit with single CD player is also available. A new top-of-the-range harman/kardon™ branded system features the premium head unit, steering-wheel mounted remote controls and a nine-speaker sound system that includes a sub-woofer and additional power amplifier. A CD autochanger is also available with this system.

A Becker Satellite Navigation System is now available for the Freelander. The system is packaged in a DIN sized head unit that offers premium sound quality with dual mode CD player that can interpret both navigation and audio CDs. The display shows key navigational data and provides visual and audio guidance. The Satellite Navigation System includes the harmon/kardon™ premium audio system and is offered as a factory fit option. It is available for all territories that have software coverage - including North America and Western Europe.

The latest Freelander models benefit from a new instrumentation pack that features white graphics with revised font on a black background. The instrument pack features a new microprocessor that provides the driver with the ability to monitor vehicle functions easily as well as acting as a ‘gateway’ for information flowing between vehicle systems.

The heater and ventilation system has been revised for 2003. A revised fan, combined with new ducting has significantly improved airflow in the vehicle while reducing fan noise.

Freelander V6 petrol models for 2003 will be fitted with a new, larger fuel tank with a revised fuel pump pick up point that will increase usable fuel capacity and range by nearly 10 per cent.

Freelander ES and ES Premium models can now be ordered with the option of a black finish side rubbing strip to protect the vehicle from car park knocks.