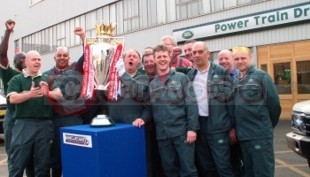 The Barclaycard Premiership Trophy was on display at Land Rover today. Mr Alan Voyce, an employee who works in Power Train Transmissions, won the opportunity to have a photograph taken with the trophy along with his colleagues at the factory where the Range Rover, Discovery, Freelander and Defender are produced.

Capital Gold radio station ran a competition asking listeners to phone in answering the question "Which football team holds the Barclaycard Premiership Trophy for 2002?" Alan rang identifying Arsenal Football Club as the present trophy holder. By answering the question correctly, Alan was then given the opportunity to be photographed with the trophy along with his colleagues.

Alan who has worked for Land Rover for twenty years said: "This has been a very enjoyable experience for me, I was shocked when I won the competition. To have the most sought-after trophy photographed alongside the Range Rover, one of the most sought-after cars in the world, has given me and my colleagues a day to remember."