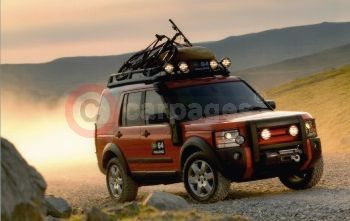 From the jungles of Southeast Asia to the high plains of South America; the 2005 Land Rover G4 Challenge promises to be even tougher and more spectacular than the inaugural 2003 event.

This time the action starts amongst the intensity of Bangkok city, and ends at high altitude on the plains of Bolivia. In between lie thousands of miles of vehicle-based adventure, strategy and sweat, with a new Range Rover as the ultimate prize.

All Land Rover models will be used during the 2005 Challenge, including the all-new Discovery 3, as well as a fifth vehicle that is yet to be announced. These near-standard vehicles will form the base of operations for the competitors as they bike, climb, kayak and 4x4 drive their way towards victory. Painted in a custom orange body colour, the vehicles will not only carry an array of equipment that will aid the competitors in their global quest for victory, but will also form an integral part of the competition, with daily 4x4 driving challenges.

"The first Land Rover G4 Challenge proved itself as one of the toughest, most spectacular adventure challenges in the world," says Matthew Taylor, managing director, Land Rover. "Its authenticity and global reach allowed us to prove that Land Rover is synonymous with adventure. And in 2005 we will be doing it again."

Working in bi-national teams, men and women representing 18 nations will pit stamina and skill in an arena stretching across four countries on two continents, over a four-week period in October 2005. From 21 June 2004, would-be competitors can apply online at www.landroverG4challenge.com , or complete an entry form at their local Land Rover dealership.

With many thousands of entries expected, each nation will hold a ‘national selections’ event, in order to identify its top three competitors. These competitors then go through to ‘international selections’, which will be held at Eastnor Castle in the UK. Ultimately only one competitor will be chosen to represent his or her nation in the 2005 Land Rover G4 Challenge.

During the 2003 Challenge, former fighter pilot Rudi Thoelen made history by becoming the first winner of the Land Rover G4 Challenge. The Belgian’s resolve, driving ability, stamina and mental agility were the key elements that put him ahead of the pack.

"I had nothing left at the end," says Thoelen of his victory. "The Challenge pushed me further than I had ever been pushed before. It is a tough test of both body and mind. And I can still hardly believe that I won it!"