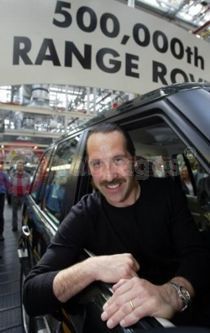 The event marks a further milestone in the continued success of Land Rover's flagship vehicle. Originally launched in 1970 as a two-door model, the Range Rover is now into its award-winning third generation with the new Range Rover launched earlier this year.

Land Rover's director of manufacturing Marin Burela commented: "This is another very special landmark for Land Rover. We have a strong British heritage and it is inspiring to know that half a million Range Rovers, designed, engineered and built in the UK, are now on the roads of countries all over the world."

David Seaman, now the proud owner of this prestigious vehicle, added: "I have always been a Range Rover enthusiast and knew that I had to buy the new one from the moment I first saw the pictures." Seaman ordered his vehicle through the Chipperfield Land Rover dealership in Kings Langley.

Production of the new Range Rover, voted the BBC Top Gear 'Car of the Year' in March, is expected to reach over 30,000 units this year, and will soon be on sale in 124 countries worldwide.

The following time line charts Range Rover history over the past 32 years:

The original Range Rover is launched. Designed by Spen King to bridge the gap between traditional cars and the now well-established Land Rover, originally a two-door fitted with a 3.5-litre V8 petrol engine and long-travel coil springs in place of the Land Rover's conventional leaf springs. While being just as rugged and capable off-road as the first Land Rovers, the Range Rover also offered comfortable, high performance on-road motoring. It quickly established itself as the undisputed leader of the four-wheel drive market, setting a new trend towards more luxurious off-road vehicles. The Range Rover also pioneered the use of dual-line servo-assisted braking, with disc brakes all round, and was the first UK production vehicle with permanent four-wheel drive.

The first major revisions to the vehicle specification are made including the addition of Power Assisted Steering (PAS).

During the 1980s, the Range Rover undergoes further developments. An automatic gearbox became an option on the Range Rover and the first luxurious 'In Vogue' limited edition appeared.

An automatic gearbox is introduced on the Range Rover for the first time.

The Range Rover, now fitted with a more powerful fuel injection engine, is launched in North America. For other markets, a diesel version is also made available, increasing total Range Rover production to a record 20,000 units for the year.

The Range Rover V8 engine is increased in size to 3.9 litres (previously 3.5 litres).

As the last two-door examples of the original Range Rover are built for export in January 1994, the all-new second-generation Range Rover is launched. Available with a choice of 4.0 and 4.6 litre V8 or 2.5 litre six-cylinder turbo diesel engines, the vehicle offered a substantially more spacious interior and a re-styled body. The vehicle also featured multi-function Electronic Air Suspension (EAS) as standard, together with Electronic Traction Control (ETC) and 'H' gate automatic transmission. The new model confirmed Range Rover's status as the world's leading luxury off-road vehicle.

Range Rover celebrates 25 years of continued production and the second-generation model is awarded the 'Best Off-Roader' accolade by What Car? magazine.

Now firmly established in the North American market, the Range Rover is voted the 'Best of the Best' in the USA's Robb Report.

Production of the new Range Rover begins at Land Rover's Solihull manufacturing plant in facilities representing an investment of £200 million.

The new Range Rover is unveiled at the London Design Museum.

After seven years production, totalling 167,259 vehicles the last second generation Range Rover is manufactured and then driven off the production line by John Hall, Chief Programme Engineer for the project, accompanied by Spen King, the man behind the original Range Rover concept.

With more than six months worth of the UK production allocation already sold, before the on-sale date of March 15 in UK dealerships, the new Range Rover is named as BBC Top Gear's 'Car of the Year'.