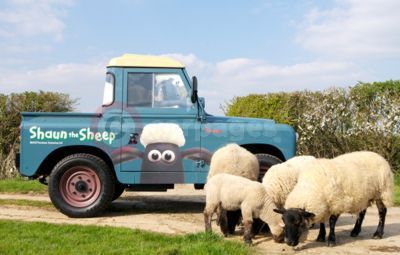 Shaun, the UK’s favourite animated sheep, is taking to the road thanks to Land Rover’s engineers.

Shaun the Sheep was first seen 12 years ago in Aardman Animations’ Wallace and Gromit adventure ‘A Close Shave’. He has now got his own children’s TV series on BBC1 and CBBC. The series will run on BBC1 in an early evening slot on Sundays. The show features a Land Rover Series I used by the Farmer and his sheep dog, Bitzer.

The craftsmen in the Solihull Tool Room were tasked with creating a life-size, exact match of the one on the small screen, from scratch.

“It is based on a Series I, but completed using a mix of several models,” said Roger Crathorne, Land Rover technical communications manager. “We used a 1951 rolling chassis with a 90-inch rear body. There are panels used from a variety of Land Rover Series vehicles including 2007 Defender panels. It has taken seven weeks to complete and has now passed its MOT making it completely road-worthy.”

Shaun’s Land Rover will be heading to various events around the country this summer including the Goodwood Festival of Speed, 22 to 24 June and The Land Rover Burghley Horse Trials, 30 August to 2 September.