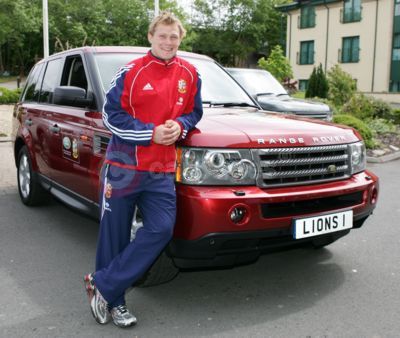 Under the terms of the agreement the Lions will benefit from the provision of a fleet of Land Rover’s luxury 4x4 vehicles for use during the Lions’ Cardiff based preparations and throughout their 11-match tour of New Zealand. The fleet of liveried vehicles will incorporate the full range of Land Rover models including the impressive new seven-seater Discovery 3 as well as their recently launched fifth vehicle, the Range Rover Sport, a critically acclaimed sports tourer.

A physically challenging tour for vehicles as well as players, Land Rover’s fleet will be an integral part of the team, providing the practicality required to transport kit, players, and support staff across New Zealand’s rugged landscape, from Auckland on the North Island to Invercargill on the South Island.

John Feehan, Chief Executive of the British & Irish Lions commented on the deal: "Securing the support of a vehicle supplier with the stature of Land Rover is a great boost for the Lions. Their impressive range of vehicles will ensure that we travel in style and comfort, arriving relaxed for official engagements."

A number of members of the Lions playing staff are not unfamiliar with the vehicles’ impressive performance and power. Lions tourists and World Cup winners, Jason Robinson and Josh Lewsey, enjoy the broad range of capabilities that their respective Range Rover and Range Rover Sport models provide.

"Having supported the Lions throughout their memorable tour of Australia in 2001, Land Rover has a proud history with the team and we are delighted to continue this association for the forthcoming tour of New Zealand," commented Andy Griffiths, Marketing Director, Land Rover UK. "The passion that the tour evokes throughout the UK and Ireland, and the power and performance that the players exhibit on the rugby field are traits that epitomise Land Rover."

The Lions deal reinforces Land Rover’s existing commitment to rugby which encompasses both the international and domestic game. As the ‘Official Vehicle of England and Premier Rugby’, Land Rover currently supplies community vehicles to the 12 premiership clubs, supporting youth participation up and down the country.
Published : 04/06/05 Author : Melanie Carter