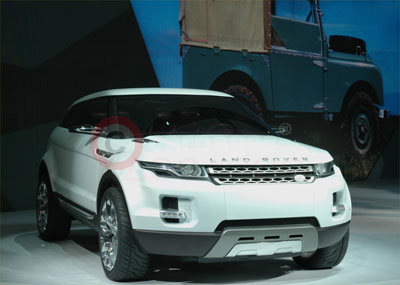 The sale of Jaguar and Land-Rover to India’s Tata group is progressing – but at Detroit it was business as usual for the two brands. And late on the opening day, Land-Rover stole the show with the unveiling of its LRX concept, a prototype for a new compact off-roader that is likely become the brand’s entry model if the company’s new owners give it the go-ahead.

For many observers, the three-door LRX was the star of the show, with handsome, purposeful looks mated to a clean 2.0-litre diesel hybrid powertrain with only 120g/kg of CO2 emissions. It was displayed alongside a 1948 Land-Rover – 2008 is the brand’s 60th anniversary, and Land Rover managing director Phil Popham stressed the links from old to new: “LRX is in every respect a Land Rover, but it’s a very different Land Rover,” he said.

LRX is the first new Land-Rover to be launched since Gerry McGovern took over as chief designer. Its hybrid system incorporates an integrated Electric Rear Axle Drive (ERAD) that lets it use electric drive alone at lower speeds. And unlike hybrid technologies used on other SUVs mechanical drive to all four wheels is retained.

Meanwhile, Jaguar is pressing ahead with the launch of the new XF. Job One rolled off the Castle Bromwich production line in Birmingham on November 26, and so far 5,000 firm orders for the car have been placed – ahead of expectations, according to Jaguar executives. Customer deliveries start in March.

Ford has announced that Tata is now the only bidder for Jaguar and Land-Rover, and while a deal is still being thrashed out, it seems that the terms will include a five-year period during which Tata cannot close any of the Jaguar or Land-Rover plants – safeguarding jobs at Halewood and Solihull for the mid-term. Executives believe all three plants will be needed – especially if the LRX becomes the LR1, as expected.