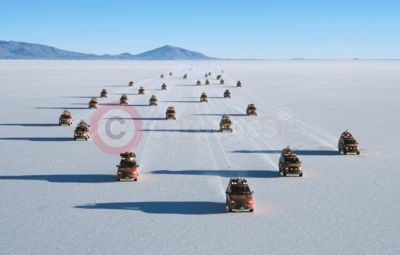 Only the top four scorers - calculated after four extreme stages in Thailand, Laos, Brazil and Bolivia - made it into the Challenge Final staged in a river bed on the Bolivia/Argentina border. Of those narrowly missing the cut were two of the three women in the Challenge; Alina McMaster of Australia and Eleonora Audra of Brazil.

"This is one of the happiest moments of my life. I cannot believe I have won," an elated Martin cheered, as fellow competitors hugged him in celebration. "Normally the events I do are a few days. This has been a month of build up."

"The final was tough. But the toughest part was the mental tasks. I so thought I had lost it. Then the next thing I knew I was slapping the bonnet of the Range Rover I had won. I never thought I would win the Land Rover G4 Challenge. I pictured myself crossing the winning line as a way to psyche myself up but to really think I would win before today would have been arrogant. Kris was a tough opponent, right to the end. I am not sure what happened to Dimi and J-B but they did good too."

Kris crossed the finish line as winner Martin was being besieged by media. He was philosophical in defeat - at the end of a week when he appeared to be getting stronger and stronger.

"I think everyone had such a good chance of winning this. I pushed myself hard but the time to Marti was just too big. I am disappointed not to win but it will not colour my 4 weeks. They have been life changing."

For a second time, the British competitor on the Land Rover G4 Challenge has won the event’s prestigious Team Spirit Award. This prize is voted for by the 18 competitors, choosing the participant that they think showed the greatest amount of team spirit in the month-long adventure.

"I am a little surprised to have won the Team Spirit Award," admitted Brian, who takes over temporary possession of the globe-shaped trophy from 2003 winner Tim Pickering. "I think the reason I won it is that I had a lot of bad luck in the competition but was able to keep a positive attitude. To have your peers give you a positive pat on the back means as much to me as winning the overall Land Rover G4 Challenge."

Challenge event director Niki Davies, added: "We are delighted with the way the Challenge has gone and we couldn’t have asked for a better finish. I know there are 17 disappointed competitors here today, but in the end we all end up taking home fantastic memories and amazing friendships. The 2006 Challenge has been a fantastic journey in every sense of the word."