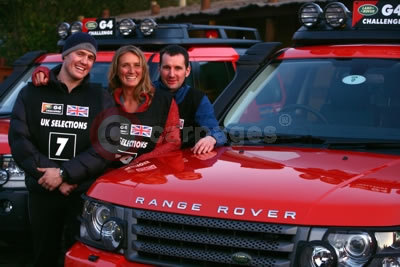 Counting down to one of the world's toughest driving and multi-sport adventure challenges, Scotsman and 2003 Land Rover G4 Challenge veteran, Tim Pickering, last week visited the Land Rover Experience in Dunkeld, Perthshire to administer some gruelling training on the three 2006 UK finalists.

Putting the British finalists through their paces ahead of the competition’s next stage - the International Selections - Tim delivered an exhausting reminder of what’s in store for railway engineer Brian Reynolds, RAF doctor Andy Grieve and overseas tour director Susanna Madge - the UK’s first female finalist.

To recap on their journey to date, all three originally entered online with thousands of other UK hopefuls, from which 50 were invited to compete in the UK National Selections event.

One of the three, Brian Reynolds, recalls: "We were given only a series of map co-ordinates and a start time, so the first challenge for those competing in the UK National Selections was to actually locate the venue where the weekend’s activities would be taking place."

Having correctly interpreted the map co-ordinates to lead them to the Home of the Legend in the West Midlands, Brian and his fellow competitors battled it through the first day’s physically and mentally demanding tasks which included off-road driving and team based multi-sport challenges.

At the end of the first day the field of 48 was unceremoniously cut to 24. For those remaining the reward was a new range of 4x4 driving, navigation and initiative assessments followed by a night challenge (4.30am), which involved the recovery of a strategically placed Land Rover Defender in a freezing lake.

Following an exhausting first day and very little sleep, the second day’s activities began with kayaking through icy water followed by climbing, abseiling and a technical mountain biking course that resulted in three UK finalists being selected for the International Selections stage, which takes place over five days at the Land Rover Experience Centre at Eastnor Castle, Herefordshire from 29 January.

Looking forward to the International Selections phase of the G4 Challenge, the three UK finalists know that just one will go forward to represent the UK in the Challenge itself. Starting amid the bustle of Bangkok on 23 April, the Challenge will then travel through the jungles of Laos, followed by a special stage on the beach in Rio de Janeiro and a climb through the mountains of Bolivia.

But before the UK finalists got too carried away with the dream of the travel adventure of a lifetime, Tim Pickering reminded them of the hard work ahead of them by building their confidence in vital off-road driving activities involving deep water obstacles, mud, ruts and heart stopping inclines using Land Rover’s full range of 4x4 vehicles - including the new Range Rover Sport and Discovery 3.

Exhausted from the final training day’s activities competitors finished with a tough kayaking challenge, during which RAF Doctor Andy Grieve experienced the exhilarating nature of G4 as he spectacularly capsized in the icy-lake.

Tim concluded, saying: "If our UK finalists think this is tough, they should wait until the actual challenge - four weeks non-stop, very little sleep, unbelievably demanding physical and mental challenges, no bed, questionable food, language barriers, and the adventure of a lifetime. I wish them all good luck - they're going to need it, together with abundant skill and stamina."

To coincide with the International Selections, starting on 29 January 2006, a competition is launched on the G4 Challenge website, www.landroverg4challenge.com , where visitors to the site get the opportunity to compete for a host of interesting prizes, most notably the chance to accompany the G4 Challenge team on the final stage of the competition in Bolivia.