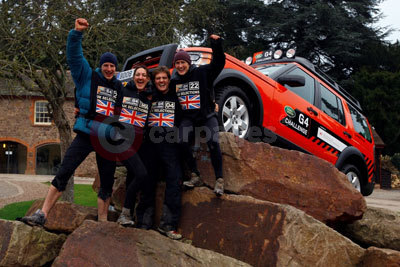 Victoria Pendleton, Olympic gold medallist swapped the track for the field this weekend as she supported competitors at the UK National Selections of the Land Rover G4 Challenge.

Victoria provided motivational guidance to 60 competitors as they were put through their paces in a gruelling 3-day selection at Eastnor Castle, Herefordshire - where the top four were selected to represent the UK at the next selections stage.

The UK finalists - the top two men and two women - Bruce Duncan, Andrew Grieve, Sarah Davies and Maria Leijerstam battled it out in a series of physical, mental and driving activities to secure their place at the Land Rover G4 Challenge International Selections.

Victoria on announcement of the winners said: "All of the competitors have really been pushed to their limits both physically and mentally over this weekend and all coped really well, but the final four are truly exceptional athletes who pretty much excelled in all of the 51 challenges they were set. Having competed on the International stage, I know only too well how nerve racking competing at this level can be and I have no doubt that any of these four have the ability to take on the other teams at the next stage. Well done to them all."

The Land Rover G4 International Selections take place in February 2009, where the final four will be whittled down to one man and one woman to make up Team UK who will compete against 17 other teams in the three-week Challenge Finals in Mongolia - one of the most sparsely populated countries on the planet.

The extremes of climate and over 1.5 million square kilometres of wild terrain - from arid steppes and mountain ranges to forests and desert - make Mongolia the ideal location for such an adventure.

Anthony Bradbury, UK Marketing Director said: "The standard of the competitors this year were, by far, the most experienced and strongest we've ever had. The Challenge Finals in Mongolia are set to be truly spectacular and we wish Andrew, Bruce, Sarah and Maria every success for the next stage."

The 2008/09 Land Rover G4 Challenge programme is run in support of the International Federation of Red Cross and Red Crescent Societies. This partnership aims to generate in excess of £1m over the course of the next two challenges.The winning team will receive a Land Rover to donate to their National Society.