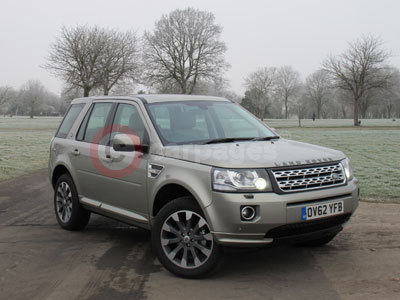 Land Rover’s Freelander 2 has plenty of fans. It is the king of the so-called ‘soft-roaders’, successor to the original Freelander which first appeared in 1997. That car was immediately popular as the smallest, most affordable modern Land Rover, and it lasted until 2006 when the second generation model made its debut. For the 2013 model year, the Freelander 2 has undergone a face-lift to smarten its exterior and re-vamp the cabin.

On the outside, there are new LED headlamps and some minor styling tweaks to freshen what is essentially a strong, purposeful design that has aged pretty well over the six-plus years of the second generation Freelander. Inside, the dashboard has been substantially re-designed to improve its looks and practicality, and more equipment has been added to the car’s standard kit-list. The car remains a respected stalwart even though the spotlight has moved to its newer brother in the Land Rover line-up, the glitzier but similarly sized Range Rover Evoque.

The engine is a 2.2 litre, six-cylinder, 24-valve unit. It pulls well and is a pretty reasonable performer, even with this lower-powered of the two units. It’s quite a heavy car to propel around, weighing in at over two tonnes, even in the version tested here without four-wheel-drive. So the 148 bhp unit under the high clam-shell bonnet has a job to do, but you don’t notice any shortage of power.

With a top speed potential well beyond the legal limit, there is plenty in hand for quiet and relaxed motorway cruising. The 0-62 acceleration time of just under 12 seconds is reasonable for a tall chunky car. It is brisk enough to feel acceptably lively in the traffic and there is ample torque that peaks at 1,750 rpm, so you have plenty on tap from quite early in the rev range.

The car performs reassuring well on-road, and even this 2x4 can cope with surprisingly tricky conditions off-road. Its high ground clearance and torquey diesel engine will trundle it successfully through some quite awkward terrain. Obviously the 4x4 version is even more capable and comes with a standard-kit variable four-wheel-drive system, Terrain Response control, which lets you set the car up for tricky conditions ahead.

This is a 9-year+ news article, from our Land Rover archive, which dates back to the year 2000.

If in doubt check with your local Land Rover dealer as car prices and technical data will have changed since 2013.