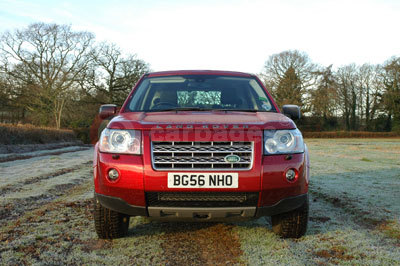 The original Land Rover Freelander was launched in 1997 and remained in production until the end of 2005. It was Europe’s top selling 4x4 for five years and was the best selling 4x4 by far in the UK. It defied social boundaries, being driven by Royalty, farmers and housewives and defined the benchmark amongst  compact SUVs.

However, it was not without some technical issues, although BMW’s  ownership of Land Rover helped iron out most of those problems . Undoubtedly the Freelander had a very loyal following, but by the end of 2005, the competition was leading the field.

The Land Rover Freelander 2 was launched in 2006 at the British Motor Show and was designed and engineered by Land Rover in the UK at Gaydon, Warwickshire. The Freelander 2 is built at the Halewood plant in Liverpool, which was acknowledged with a JD Power European Plant Quality Gold Award in 2005.

Land Rover is now gunning for a wealthier clientele who currently are driving cars such as BMW’s X3 and Volvo’s XC90. In order to entice these loyal owners away, the Freelander 2 has had to be improved in every way: which has been achieved by offering better performance, improved fuel economy, higher quality interior materials and fabrics and it is substantially roomier. It is even more capable both on and off-road, with transformed handling, ride quality and comfort. No longer is there a soft top model and the Freelander 2 is only available as a 5-door, which is far more practical for family users.

You now have the option of two new engines, a 3.2-litre i6 petrol (233 PS / 171 kW) as seen in the Volvo XC90 which is coupled to a six speed automatic gearbox or a 2.2-litre TD4 diesel (160 PS / 118 kW) which is sourced from PSA Peugeot-Citroen Group, which can be specified with a six speed manual or automatic transmission.

To give you some idea of the fuel saving that can be made by opting for a diesel engine, the straight six 3.2 petrol engine has a quoted combined fuel figure of 25.2 mpg compared to the diesel’s 33.2 mpg (both automatic) - so in theory around 8 mpg difference but with increasing diesel prices this might not be such a gain.

Interestingly the 3.2-litre i6 petrol engine is 30 per cent more powerful than the outgoing V6 with 10 per cent improvement in fuel economy; and the 2.2-litre TD4 diesel has a whopping 43 per cent more power  than the old engine, yet returns more to the gallon. Acceleration from 0-60 mph now takes 10.9 seconds in manual guise, which is significantly reduced from 13.2 seconds for the previous diesel model. We drove a Land Rover Freelander HSE fitted with the 2.2-litre TD4 diesel with a six speed manual gearbox.

We would have preferred to test an automatic Freelander but at the time one wasn’t available the main reason for our preference is that we are lazy and prefer automatics off road. In practice the six speed gearbox is very easy to use, if not a little notchy but it is far from agricultural and is a pleasure to use around town.